Why the delay in our trip summary? Will was in Washington DC for a long weekend. He presented a thing on data security at PyData DC. At some time, we’ll be able to see his talk on YouTube. Oh no. I’m not at all interesting in securing my data, but I want to see if he was nervous, told any jokes, mentioned his mother, etc. Boy! The kid has certainly come a long way from the time he built that tin foil, shoe box, alien message receiving hat in first grade! But now that he’s back and can get these things on the blog……………

Just to clarify, “.. we got on a bus and went back to the house”. We did not take our lunch partner lady on the bus and home with us. Visiting with strangers is one thing, but taking them home with you is quite another thing. She had to go back to work anyway.

When we got back to the house, we all had big 2 hour naps! We needed those. When we got up, we drove over to the Fishermen’s Terminal, purchased some live crabs and put them in a cooler. Will observed that, when the guy used a hoe to pull one crab out of the water, the crab clamped onto the hoe and the guy had to battle it off the hoe. I think the guy even got another stick of some sort to whack it off the hoe. We went on to the Fred Meyer (like our Walmart) and Will got equipment for his next cooking project.

Will set up stuff for our crab boil supper –outdoor burner, large pot of boiling water, etc. Will had watched his friend, Ben, do this crab boiling. The thing is……………Ben made the whole process look so easy! Ben grew up on the east coast, Maryland, and is very used to dealing with live, wiggling, pinching seafood. To us Minnesota folks, this was something completely new but how hard could it be?

We waited for Joni to get home from work because it was safer. We needed someone there who is not easily freaked out and could actually dial 911 in a crisis. Will got the water boiling good and then went after the crabs. 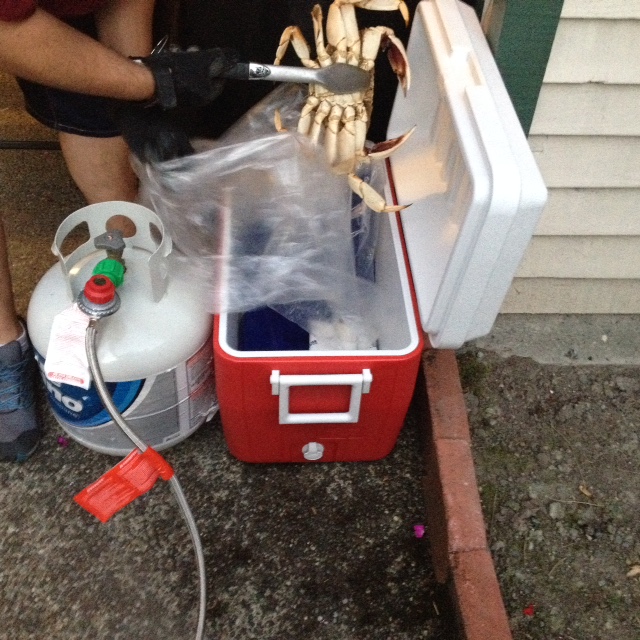 This first step took a while as Will built up his courage and tried various methods to remove the crabs from the cooler. (notice the gloves) Long tongs used for grilling turned out to be the right, don’t get bit, cooking tool. Once Beauty found out there was something alive and kickin’ in that cooler, she sure wanted to have a closer look. 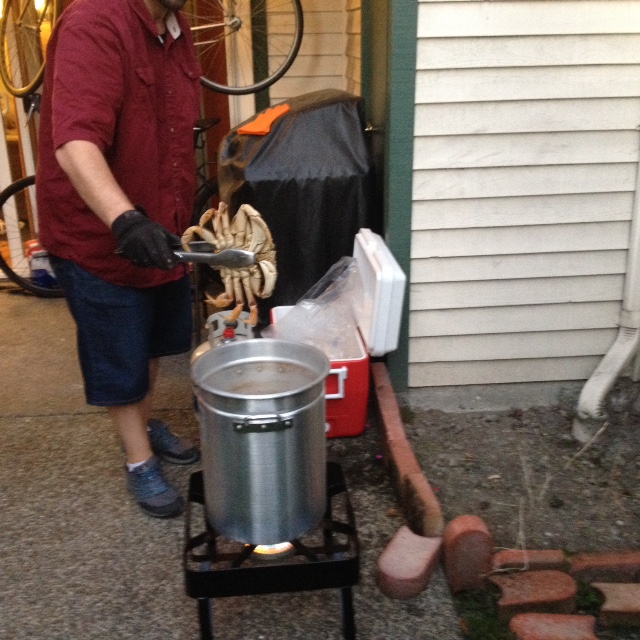 We got the crabs in the pot and I was the official timer; ten to fifteen minutes of hard boiling. After the usual jokes about hearing little cries of “HEEEEEEEEEEEELLLLLPPPPPPPP” coming from the pot, little scratching noises in the pot, and seeing little legs pushing the cover off, Will got the crabs out of the pot. 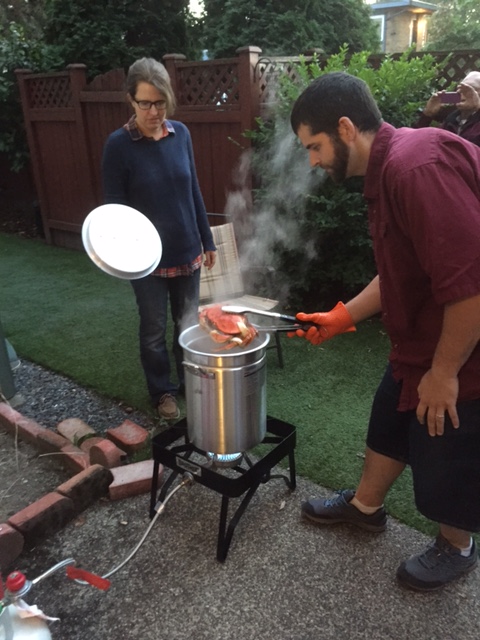 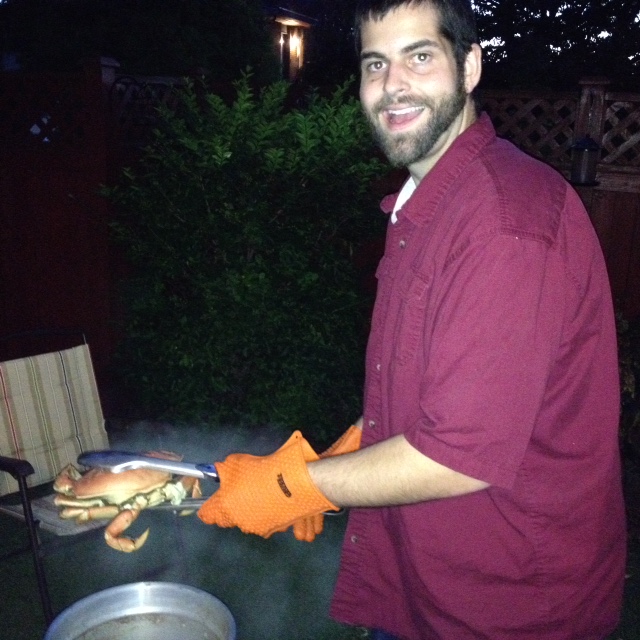 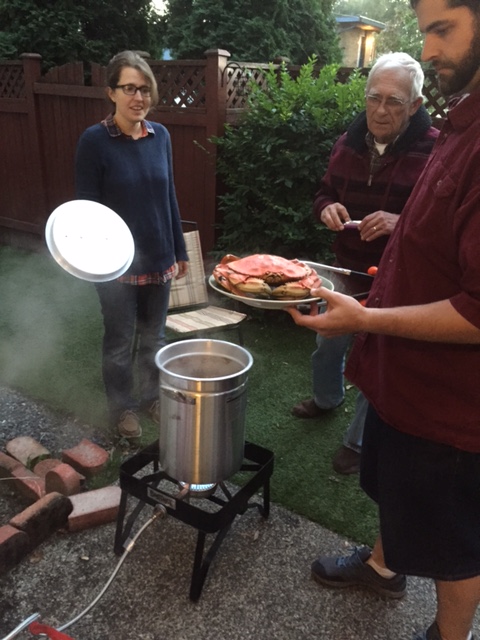 And to the table 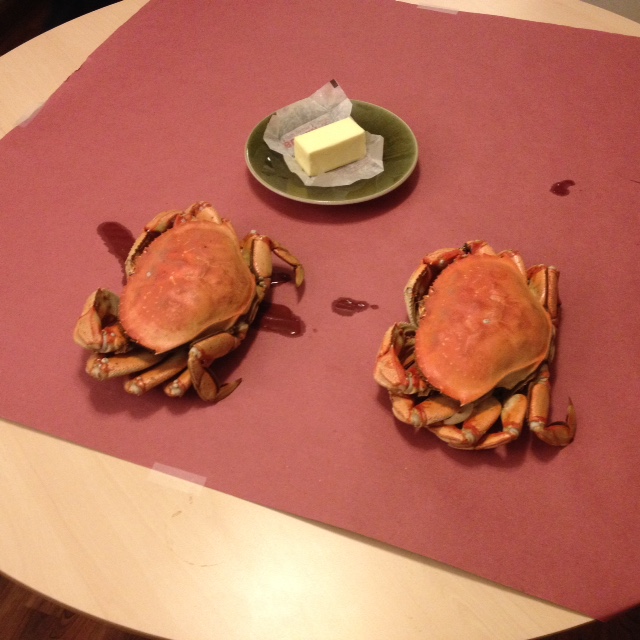 Well, I can tell you! It was worth the commotion. The crab was delicious. Joni knew how to crack that little guy’s head off, open it up and pull those legs off. So she did that part for us. We had melted butter and various homemade sauces with the crab. We had lots of crab left over so, when we had eaten our fill (I thought Eldon would never stop), we picked the remaining meat/fish out of the crabs. It reminded me of picking the leftover meat off the turkey at Thanksgiving.

OK, so I was fine with eating the crab at the time. But a few days later when Will sent this picture……………………. 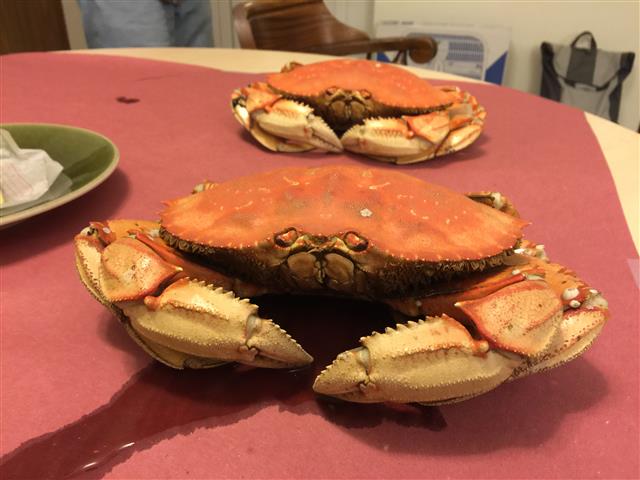 At the time, had I viewed the crabs from this angle……………………..well, I might have had second thoughts about eating the poor little critters. See their little eyes and sad mouths? They look so helpless!

When we were done with supper, Will put together his cooking project which involved flank steak, a house fan, and furnace filters. Will and Joni love to watch the famous chef, Alton Brown, who cooks scientifically and avoids using conventional kitchen cooking equipment. Some refer to Alton Brown as “the Bill Nye of Food” (if you are old enough to remember Bill Nye, the Science Guy). Will is very excited about going to Alton Brown’s book signing event in Seattle in about a week.

We watched some TV in the evening and heard the news coming in about the shooting at the Burlington Mall about 60 miles north of Seattle. Also saw a report on how someone is throwing little tacks on the new bike trail; the one Will rides to work on. The report had pictures of the park and geese he rides by every day. The trail was just completed and opened. Some people are not happy about their tax dollars being spent in such a manner, all those bikers going by and one biker had two flat tires in two days. We also learned that Walker, Texas Ranger is a pretty silly TV program compared to the programs we see today.

Since we had no activities until 11am the next morning, we went to bed expecting to sleep in Saturday morning.

Continue on to part 4…