We started down the street toward the Doppler Building. [DOPPLER= first codename for Amazon’s Echo thing] We saw various other Amazon buildings with beautiful courtyards between them. We saw the construction of Amazon’s Spheres which will open in 2018. The Spheres (big white round buildings) will have plants from around the world and everything will be regulated with the latest high-tech environmental controlling things. It’s Amazon’s contribution to “nature” in the city.

At the Doppler Building, we had our picture taken on an outdoor deck by the official Amazon photographer. Then Eldon took an amateur picture of the professional photographer. 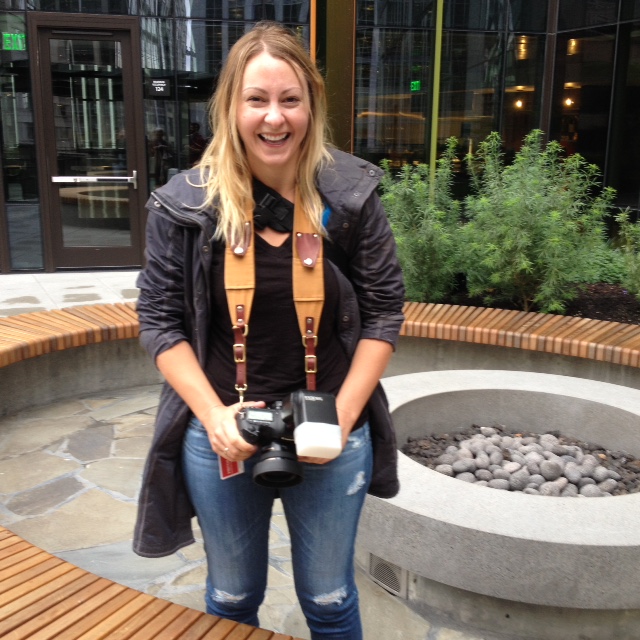 The Doppler building is new too and has quite the features. The first floor was a Marketplace where employees could buy flowers, lunches and snacks, coffee, etc. It had places to eat and lots of tables and seating area for employees to sit and look outside…………….and work, I guess. There was a girl providing entertainment with her guitar. 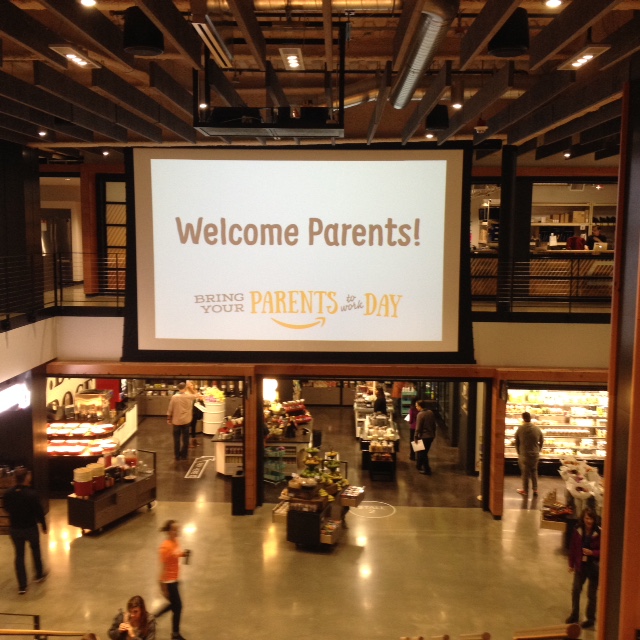 On the upper floors we visited the Expressions Lab where employees can express themselves (anytime during the day or night) through art activities or take classes in various art forms. Apparently Amazon has an Art teacher on staff. We could paint a picture on a little canvas if we wanted to but we were more interested in watching the 3D printer making something and viewing things the printer had made –a full size pair of shoes! Someone had made the Amazon logo out of Legos. There were quite a few people lined up to make a video of themselves dressed up in accessories so we skipped that event.

Next we visited the outdoor Dog Walking area. Since so many Amazon employees bring their dogs to work, they have their own outside dog walking park ON THE 17TH FLOOR! We picked up some sample dog treats and a green scarf for Beauty. We walked across the hall to a room where Amazon was giving everyone a special memento of Parents Day. 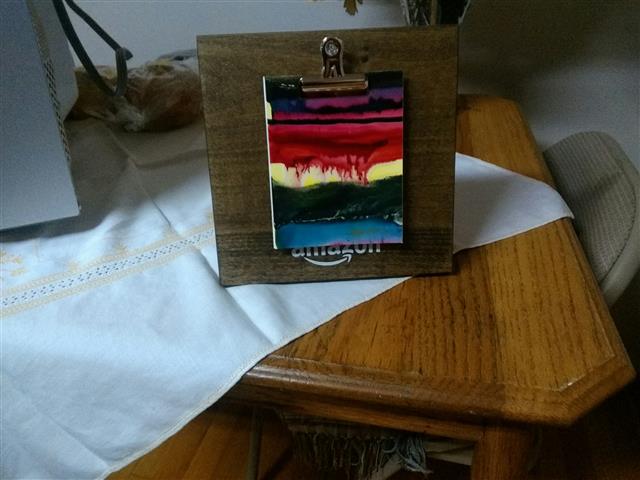 It’s a picture frame……………well, actually it is a block of wood that someone attached a clip to with a screw. Maybe the Art Expressions group made those up during the “Power Drill Your Way to Creativity” class? We got one for Joni too. We stopped for coffee and a pastry in the same room.

We walked through a skyway to the big Meeting Room. As we entered the building, I noticed a “No Dogs Allowed” sign –the first and probably only such sign in all of Amazon’s buildings. They called it the Amazon Science Fair and it was one of my favorite events. The room was like a gym and could seat up to 1600 people. It was here that I got a real sense that EVERYONE’S parents had shown up for Parents Day! It was packed with people.

By this time the boys were wearing out so they sat down. I walked around, found interesting things, came back and reported it to the boys. Then they would get up and go over to investigate whatever it was. For example(s): they had one of the robots here that scoots around the Distribution Centers picking up product. The thing could raise way up and carry like 6 million pounds. They had one of the drones displayed that will be delivering our orders in the future. The guys really liked seeing the drone and that station were giving out candy bars too. 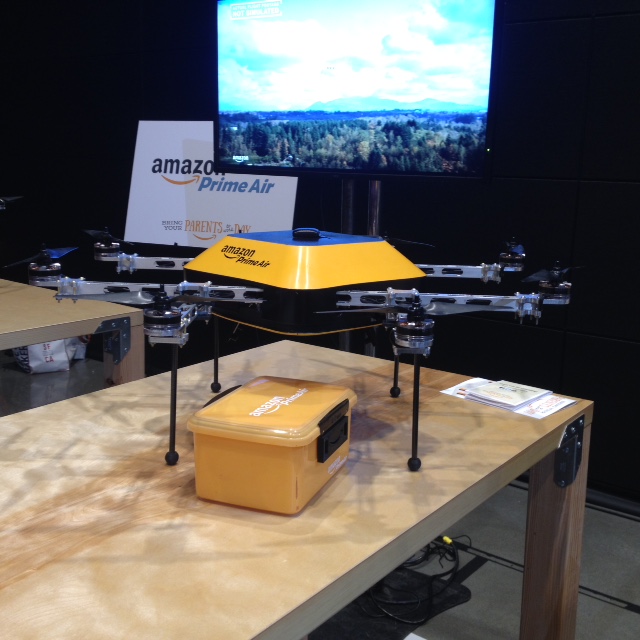 We went over to this outfit that tracks various things. For the Science Fair, they had it tracking how full the kegs of root beer were, what the temperature of the root beer was, etc. AND they were making root beer floats for everyone. Just for demonstration purposes, they had a regular beer keg connected to a tracker too. Apparently some parents did not realize the beer keg was just for show because they were over there getting cups of beer at 11am in the morning.

The guys were not interested in Amazon Restaurants. I did not pay too much attention to it either because I was quite sure Amazon does NOT have restaurants. Otherwise I would have heard about them. As it turns out, Amazon has a delivery service where they will delivery your order from various restaurants. The employees can call a restaurant in the morning, order lunch, and it will be at your building at noon…………..delivered by Amazon Restaurants. I can’t remember the other things very well –something about running conventions for you, the new Prime Air, and dash buttons for quickly ordering everyday products. So the Science Fair was showcasing all the new unclassified products/services Amazon is working on. They did not show us their secret projects and I did not think to ask Will to show me where Amazon has those hidden………..like that would ever happen. I’m still miffed over Amazon’s “Don’t Even Tell Your Mother” policy!

Next it was the Amazon 101 Information Sessions. We got in line to file into another auditorium. It must have seated 350-400 people. A lady gave a talk about her experiences at Amazon and it was followed by a video of the CEO, Jeff Bezos, giving a nice talk. It lasted 30 minutes. As we filed out, the next group was waiting to get in. This session was given every half hour from 10:30am-2pm. So that’s 7 sessions x 350 people =2450 people. And another 2450 people were not going to go to the sessions because they were touring other buildings, got too tired, got waylaid at the beer keg, etc. So that’s at least 4900 Amazon employees and parents milling around. I was certainly corrected on the “not too many parents can attend” idea.

We went into a small burger place for lunch. I had a wonderful visit with a lady…………well, I had to visit because I accidentally sat down at her table! I thought she was with the group at the next table, but no. She was at her own table and was good enough to let me (us) continue to sit at her table. I told her it was Amazon’s Parents Day. She said she works a few blocks over so is around the area every day. She had noticed a real increase in the amount of people downtown today. After lunch, we got on a bus and went back to the house. I thought the day would be winding down, but found that there was a lot more to get done that Friday.