Well, we went camping… again. Back on the weekend of Oct 21st we packed ourselves up and headed out to the middle of nowhere for a weekend of camping with Jenn and Wouter. We left Friday afternoon and got up to the campground around dark… but there was a problem. We rolled up to the campground and the gate was firmly shut. It was closed. “Oh no!”, we thought. “How can this be?!”, we bemoaned. We drove back down the isolated back road to a different campsite and found a flyer posted that said most campgrounds were closed due to potential landslides. Fires last year had taken out most of the plant life in some areas, so a big rain could bring down a lot of ground.

Undeterred, we went back down the road a bit more and found the one open campground in the area. There weren’t a ton of people around. Just a few hunters really (it was deer season and hunters set up shop in the campgrounds, then ran around to do their hunting). At this point we had a campsite, but one major issue: Jenn and Wouter were coming later and didn’t know where we were… and there is no cell service in the area. So we did the only reasonable thing: Joni put me in the tent and zipped off (tires screeching) to head back down the back road far enough to get cell signal to tell them where we were.

So I got left alone… in the rain (more like sprinkles at this point), in the dark, in the middle of a mostly deserted campground, with just a tent, a blanket, my chair, and a book. I laid in the tent and read my book… and shivered just a little. I only got through a quarter of my book before Joni got back, then minutes later Jenn and Wouter rolled in. So it all worked out OK. We got all set up and hit the hay.

The next morning we finally got to see what the area looked like: 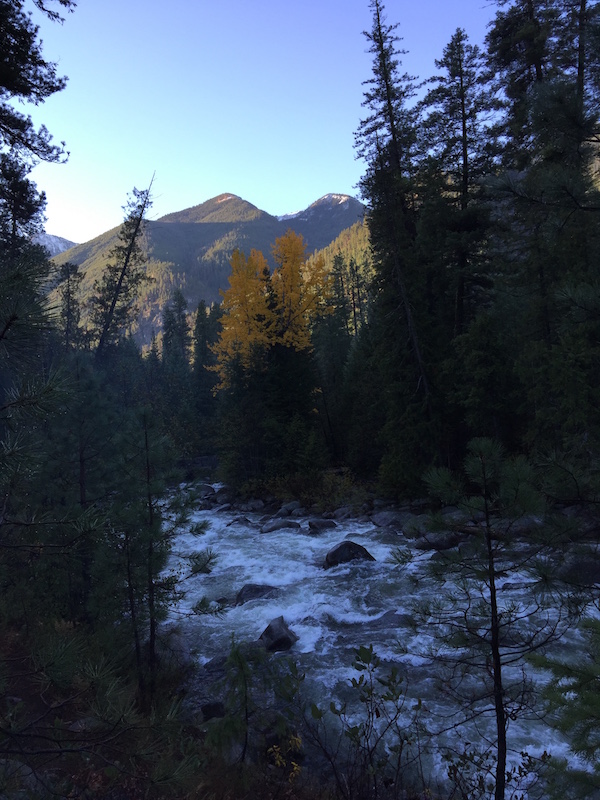 We also got the see the source of the big “WHOOOOOOOOSSSSSSHHHING” noise we had been hearing all night: 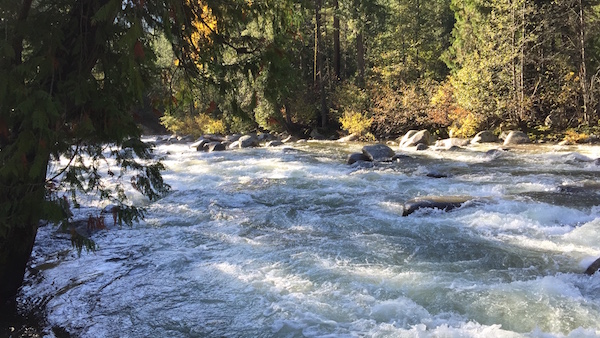 Yep, that’s a river. It was really zipping along too. I wish there was some way to show that…

The big attraction for the day was going up to Silver Falls. We were actually out in this area last year about this time, but one of the dogs we were camping with had just had leg surgery, so we didn’t go too far from the camp. This time all bets were off! So up the road we went (in the car) to the trail to walk to the falls. Got that? Good. We started wandering up this wooded trail and quickly found some falls: 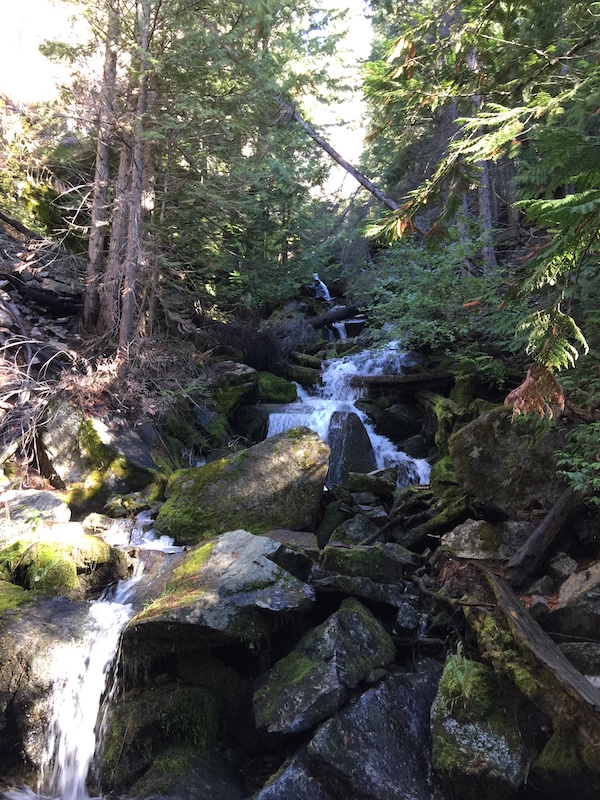 Ah, but those were red herring falls… fake falls. Well, falls, but not the falls we were after. We looked around a bit and found that the trail went across the stream, but there was no way to get across. There had been flooding and the bridge was out. Suddenly the closed campsites didn’t seem so strange. Jenn and Wouter managed to get across, but I was scared of that nonsense and continued up the side of the stream we started on with Joni. Soon we the continuation of the trail. 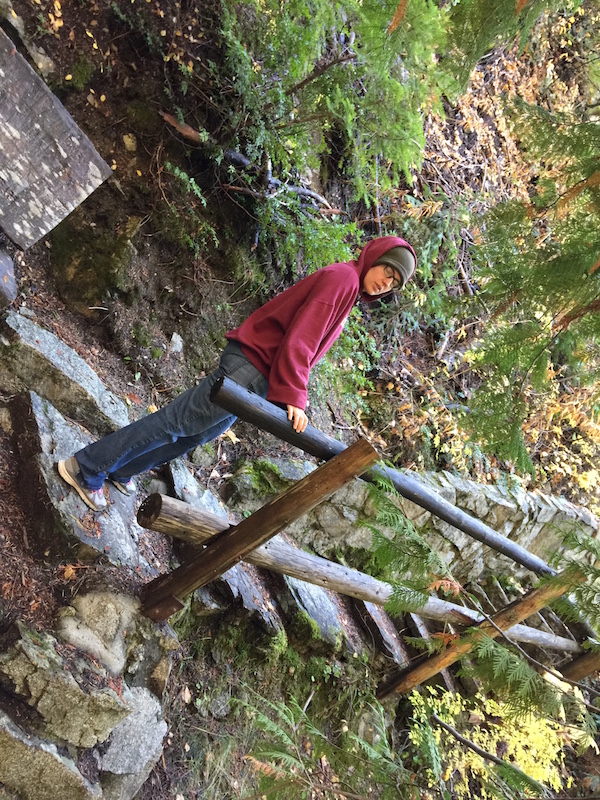 Jenn and Wouter made it back across and we continued up the mountain. Pretty soon we got a view of the real falls. 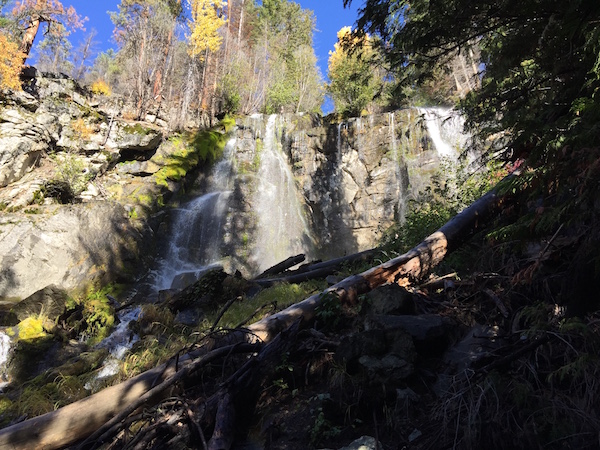 We of course stopped for a photo op. What’s camping without photo ops?! 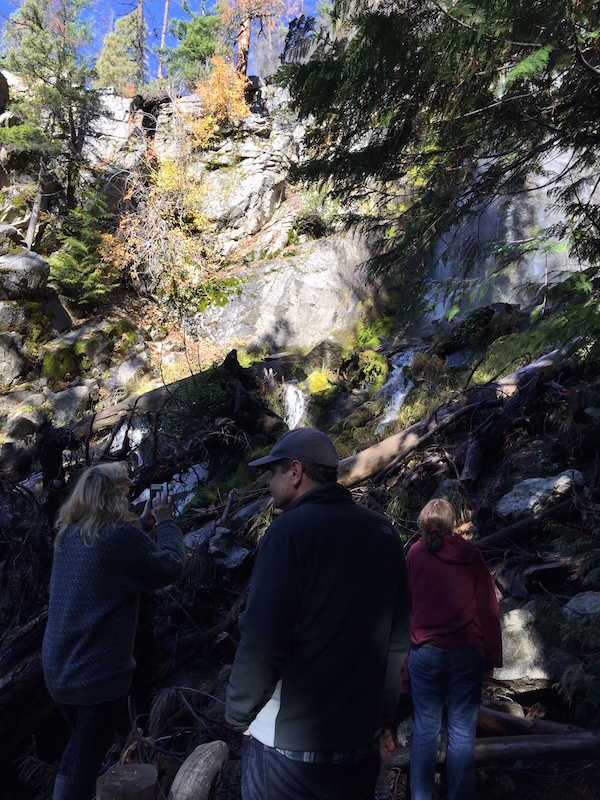 Jenn and Joni really got into the photo op stop. 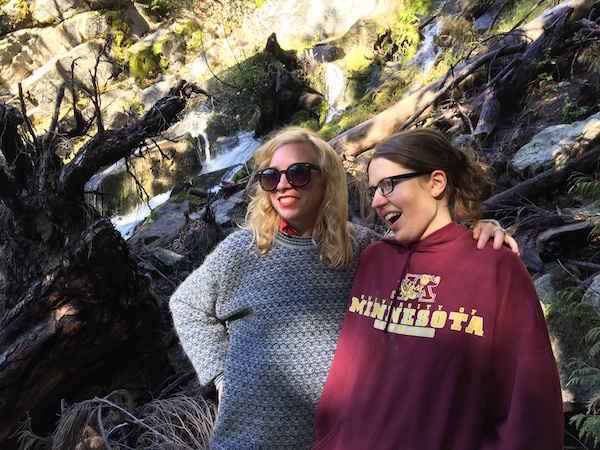 Wouter dealt with it. 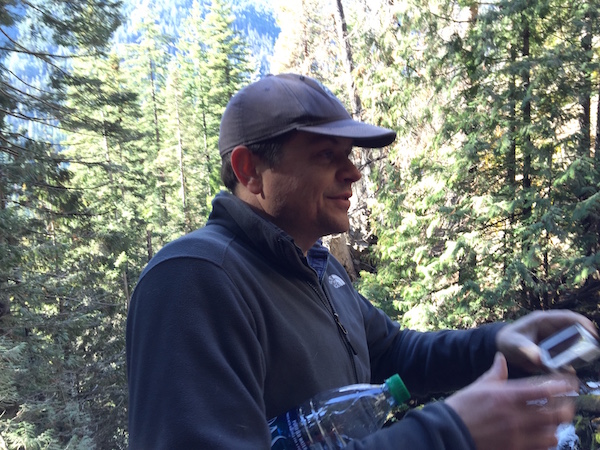 OK, back up the trail! 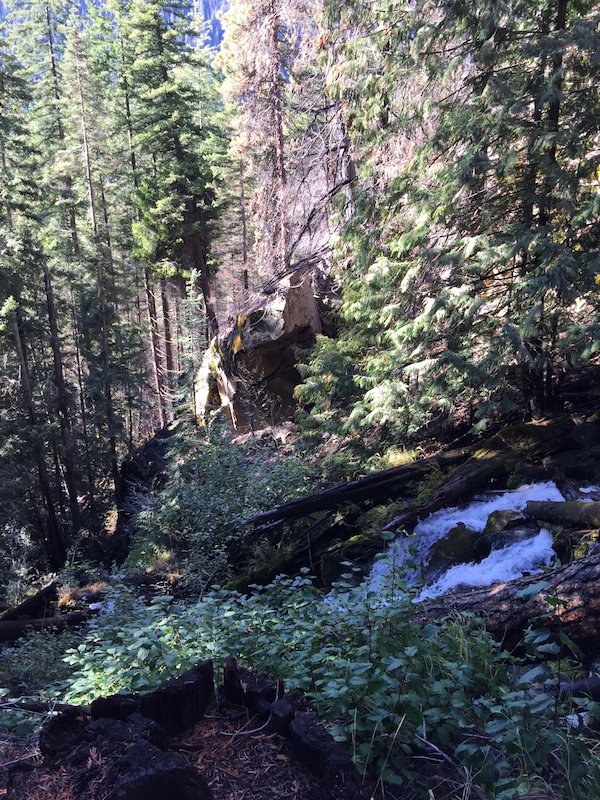 We finally made it to the falls! 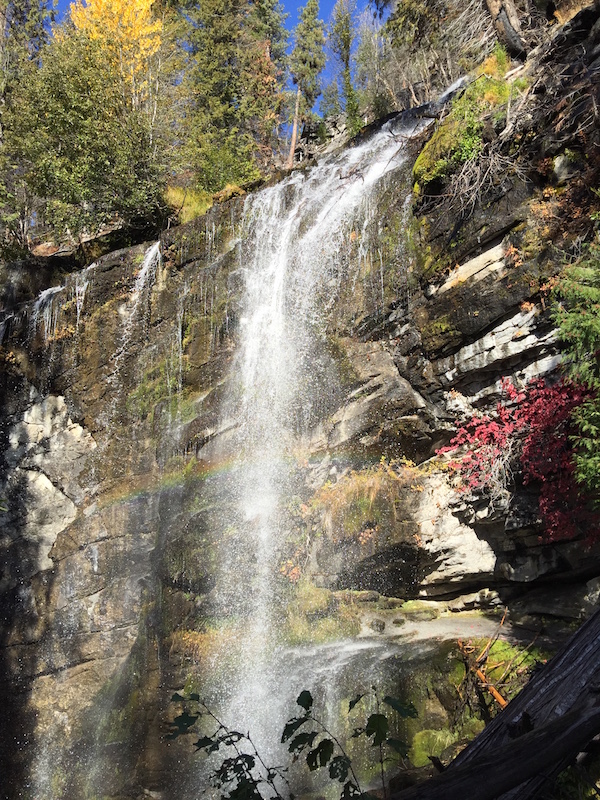 They were really neat. You can actually walk around and get under them. Here’s a Wouter for comparison: 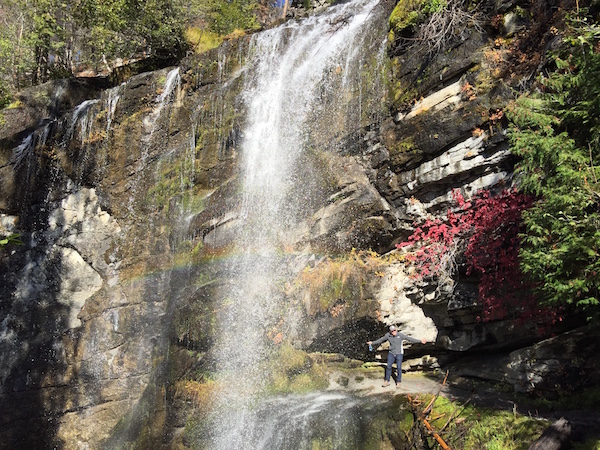 Yeah, it was really pretty. 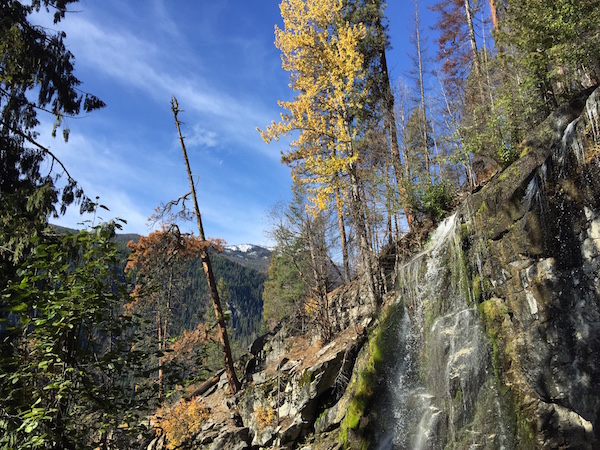 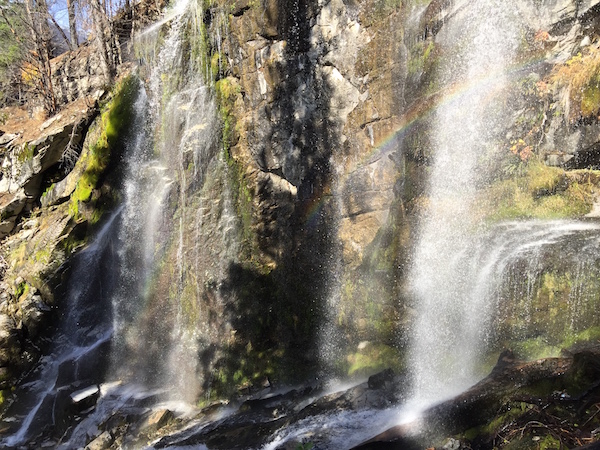 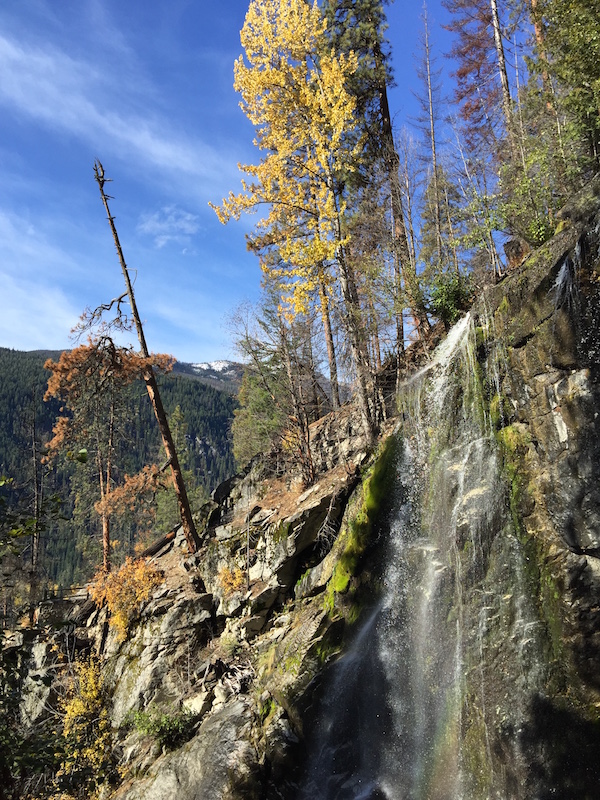 After ogling the falls for a bit, we found that the trail branched and continued up the mountain even more! We weren’t exactly booked for the day, so we went exploring. 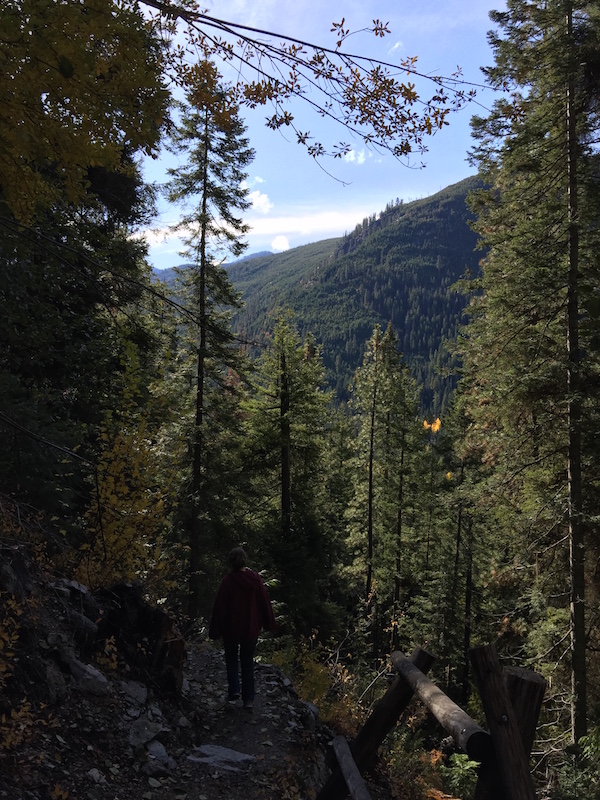 It was worth it. 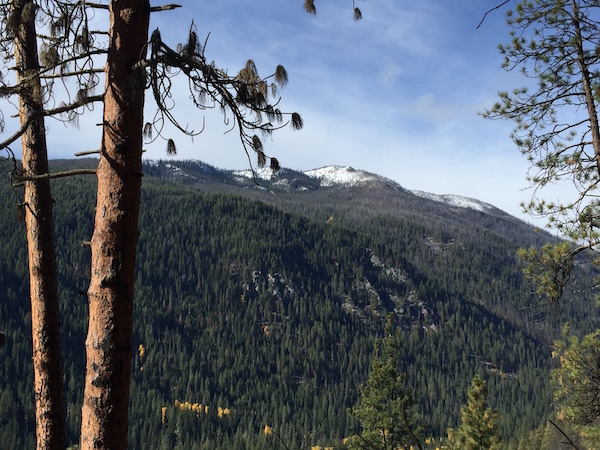 We found a big bench at the top of the trail, so we sat down and had another photo op. 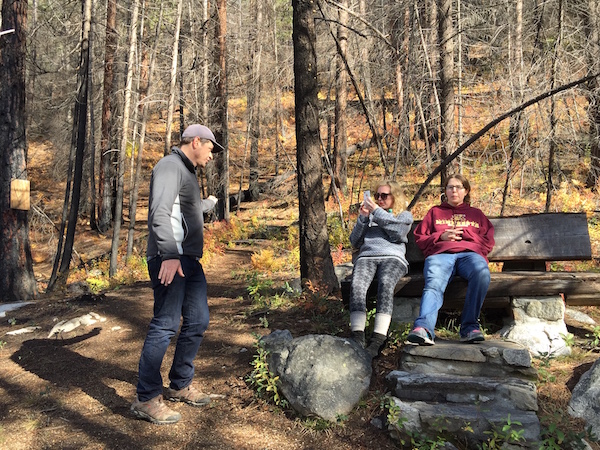 This time Joni had to tolerate me! 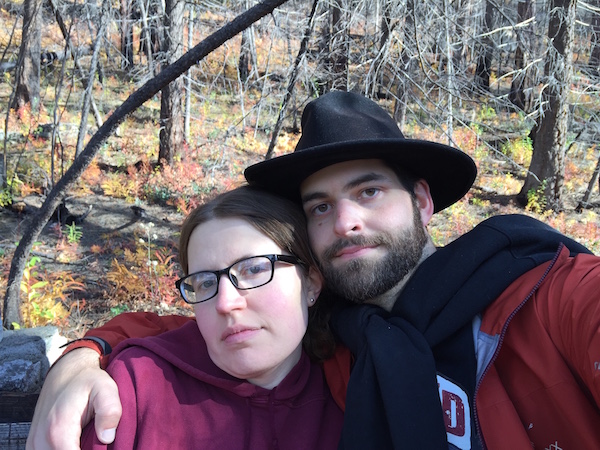 We wandered back down the mountain, got in the car, and drove 15 miles down the road to get some firewood. We hauled all that back to camp and spent the day cooking, eating, playing cards, and chatting. The evening brought a nice fire and complaining about the cold. The next morning we got up for breakfast, then packed up camp to get back to the city.

Jenn took a moment to reflect next to the river: 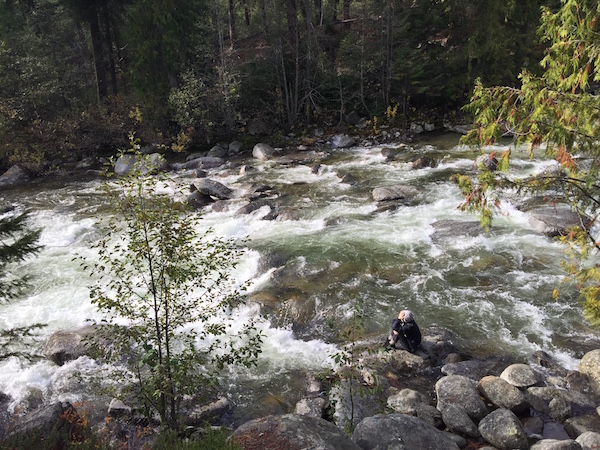 We got on the road and headed back to Seattle. At this point I need to have a complete aside because I saw something on the way back I just don’t understand: two lanes (for passing) going in one direction, but passing allowed from the single lane going in the other direction! 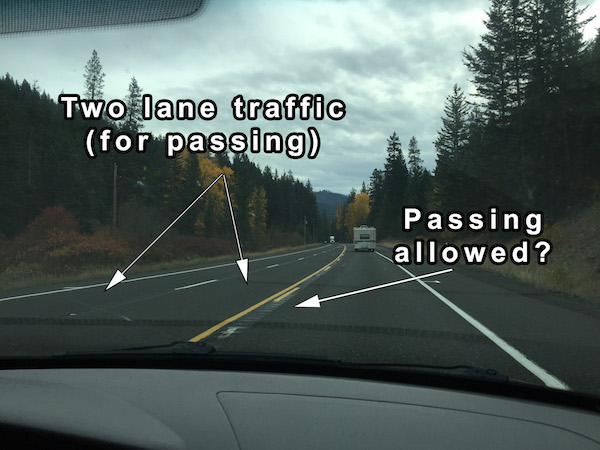 I’m really confused by this because I don’t know if it’s OK to actually have a double pass with two cars using both lanes on the other side of the road to pass vehicles in the single lane. The whole thing just doesn’t make any sense.

But that’s the end of the camping story. If all that was too much to read (huh, maybe this should have been at the top?), then you can just watch this little montage of our camping activities: