Well, it’s been a while, eh? I wish I could say that I’ve been good about keeping up with the blog, but I really haven’t. Case in point: this post! Joni’s birthday was in the middle of February, and we went to Las Vegas with Dennis and Pam (Joni’s parents)! Did I blog about that in a timely fashion? No. No, I did not. But I’m blogging about it now. That counts for something, right?

We took Friday off and flew down early. We wanted to maximize our time there. We met up with Dennis and Pam late morning at the hotel. We wandered around a little bit trying to find some lunch. Joni got wind that there might be a gluten free pizza place, but we couldn’t actually find it. We settled for some food bar in the hotel. Very quickly though we had to run off to our first adventure: Las Vegas Segway Tour!

The tour started in downtown, took us through the main downtown district, up through the arty part of the downtown, then back around to the starting point. All said and done it was a couple of hours of rolling around downtown. I have to say, Segways actually are pretty easy to drive. We all got the hang of the basics pretty quick. 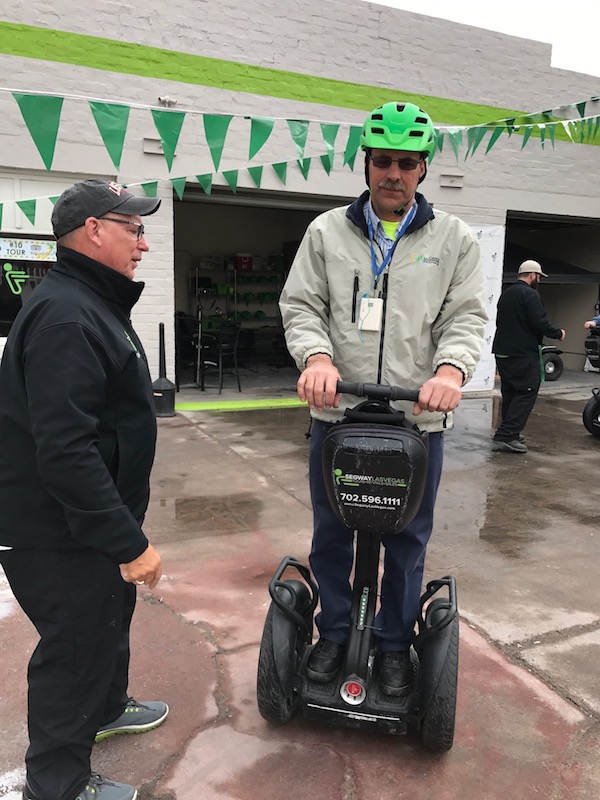 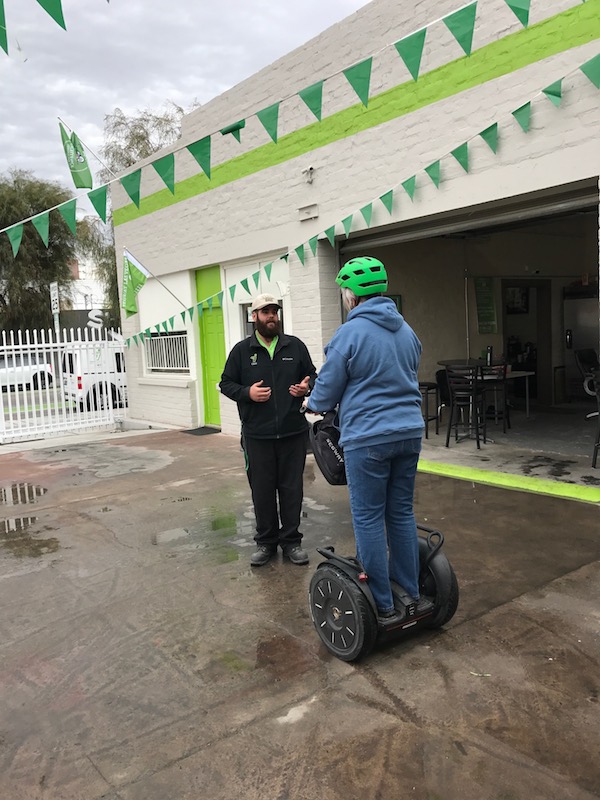 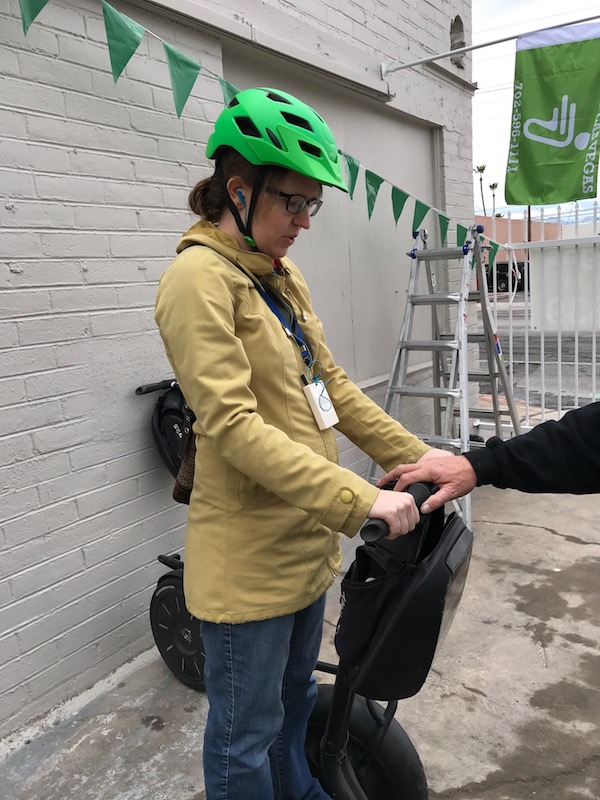 There you can also see the little boxes with headphones they gave us. They were hooked up to the tour guide’s mike so we could hear him as we zipped around. We started the tour in the parking lot just getting the hang of the Segways. I have to admit that I struggled getting the hang of stopping… That little factoid might be important later.

We got going pretty quick and zipped down to see city hall. Then we headed over to Lou Ruvo center. That’s a clinic for brain disorders that is designed to kind of look like a tornado hit it. Across the street from that we saw the World Market Center. They have a big furniture show there every year and in the off season they rent it out as venue space for miscellaneous events.

The next section was Symphony Park and the children’s museum. Along the way we heard about popular mayor Oscar Goodman and his involvement in numerous city projects. We also took a picture in front of the crazy art sculpture they have in the park. The next section was the “fun” section where we had a long piece of road with no traffic and we could open up the Segways and get up to top speed… which was about 12mph. It was weird because when you get up to top speed, the Segway kind of “pushes back” so you feel like you might get flipped backwards.

And remember that little “stopping is hard” thing from earlier? Yeah, I neeeaaarly had a crash. The tour guide, Dennis, and Pam had all gotten to the stopping point and were stopped. I was coming in VERY hot and had to pull a sweet little swerve move between Dennis and Pam to avoid hitting anyone. I’m sure it looked very cool.

We stopped for a bit and looked at The Plaza hotel, which as any Back to The Future fan will tell you was the model for Biff’s Hotel in BTTFII. I made it a point to get a picture of the front side (we were on the back side at the time) a few nights later: 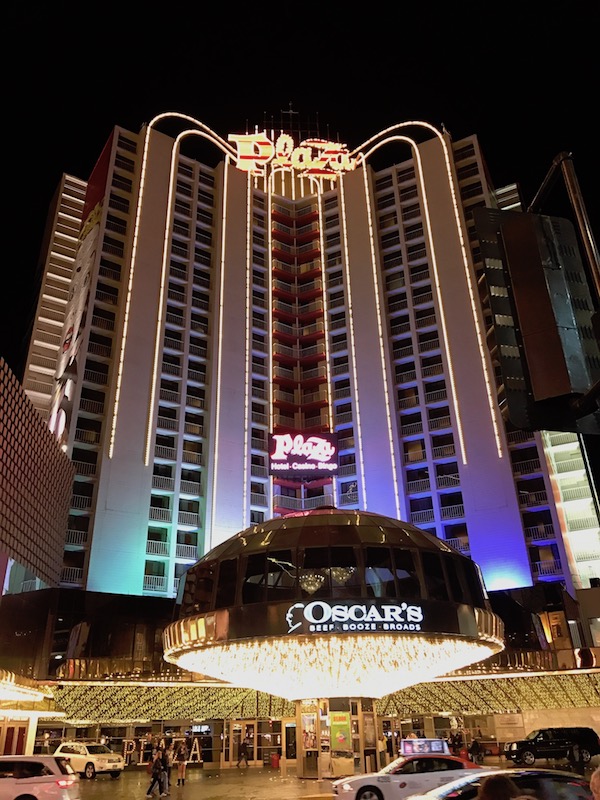 Moving on from here, we took a perilous journey under an overpass and through construction to get to Rick’s Restorations. Rick’s is home of the American Restoration television show that spun off from Pawn Stars. We dismounted for a bit and looked through their gift shop.

Heading back through the construction, under a second overpass, and into downtown, we came to the Downtown Farmer’s Market. They weren’t really open, so we didn’t stay long, but Dennis did grab a sample of honey. You can never have enough snacks when you’re running around on your Segway.

We zipped past the Mob Museum (we’ll be back to that later), and rolled up on Zappos headquarters. 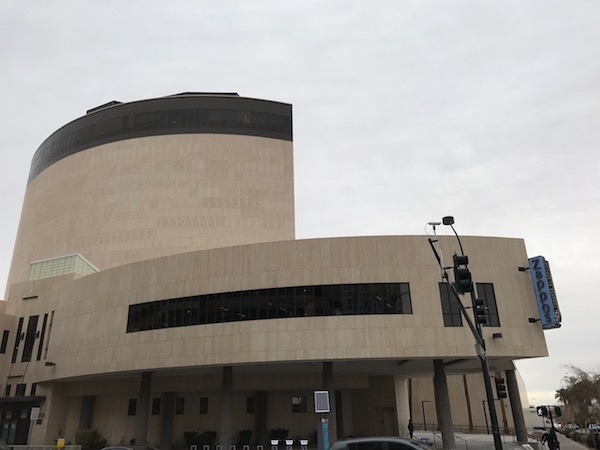 Zappos is an online shoe retailer that Amazon bought back in 2009. They were hacked in 2012, and that event was the trigger that lead to first stuff I worked on when I joined the company and was indirectly responsible for getting backing for the whole organization I currently work for. So of course I had to take a picture.

We moved on to the artsy part of the tour and went through several alleys checking out the downtown murals. Every year artists come downtown and put up big elaborate murals. They’re pretty neat.

We kept rolling and found ourselves at an old closed down motel. The tour guide kind of tricked us by bringing us around a corner so we were suddenly presented with this: 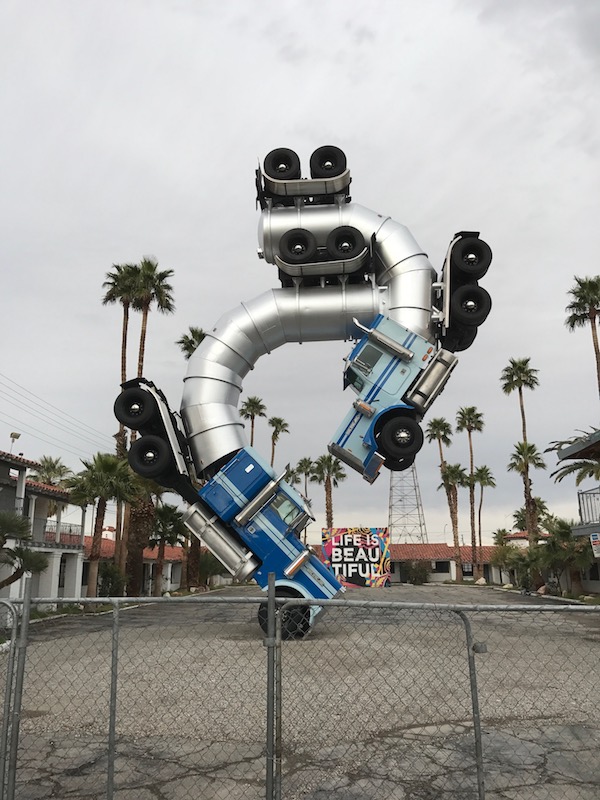 That crazy thing lights up and spits out smoke every now and then. It was very weird to just suddenly run into such a thing. And it must be relatively new since even Google Maps doesn’t have it.

Our next stop was the Container Park. There’s a nice little urban sanctuary that’s been built entirely out of shipping containers. It’s this little place in the middle of the city with trendy shops, restaurants, and open music/play spaces. It’s really pretty cool. We checked out a toy store and sat down for a minute (running a Segway is hard work), but we didn’t stay all that long.

We hit the gas and zipped over to the Pawn Stars place and had a quick glance, just to say we did. Then we headed back to the tour building, turned in our Segways (they don’t let you keep them…) and got our official Segway Certificate of Awesome. 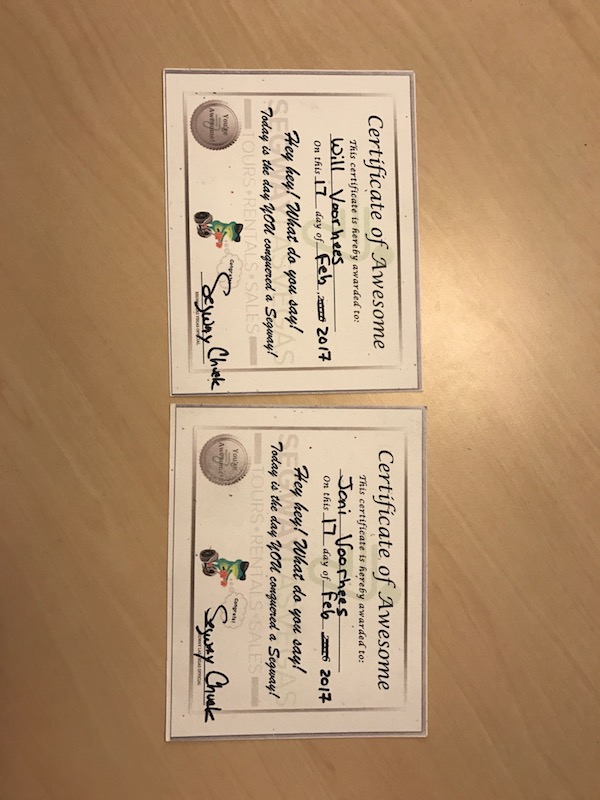 You might be impressed that I remember all that. Well, truth be told, I had to get on Google Maps and retrace the route we took to remember where we stopped and what we did. I wasn’t exactly taking copious notes during the whole tour!

The whole thing was a really good time. And this was just the first day on our trip! But we’re not done yet. This was just our afternoon. Our evening was also an adventure. After a brief rest and some snacks from a nearby jerky store… wait, this deserves a second. There was this jerky store not too far from the hotel. They had all sorts of bagged candies and dried goods in addition to jerky, so we loaded up with chocolate covered espresso beans, dried apple slices, and, of course, jerky. They also had crazy jerkies like alligator, kangaroo, tuna, and tofu. We were going to get a bunch of weird jerkies to try later, but we ended up missing out because the store was closed at the only other times we were around. Just unlucky timing really.

But anyway, after our little snack we headed down to Caesars Palace to see a show. We saw Absinthe. It was an adult variety show. It had some good acts, but the MCs really just did crazy crude humor the whole time. They were a couple of funny things (that aren’t appropriate for a family blog), but by and large it was the acts that stood out. There was a comedy act that did a man and woman burlesque style dance, but they acted incompetent and stepped on each other and couldn’t complete some of their tricks. There were a couple of tap dancers that were really good. And the finale with a group of tightrope walkers wasn’t bad either.

You’d think that after such a full day we’d be tired. Well, we were, but we also hadn’t had a proper dinner, so we dragged ourselves to the steak and lobster dinner deal at the hotel, ate that in severe fatigue, then immediately went to bed. We had a big day ahead of us.