Because of our late goings on last night, we weren’t exactly early risers this morning. I think I was up at 9 or so and Mary Jo was awake and wandering about at 10:30. We did a little Internet browsing to get ourselves fully awake. Once we had the coherence to actually create full sentences, we decided it was time to bust open the gifts!

Mary Jo got tasty foods. She got me a whopping 4 presents, so I opened up the first couple to discover a chocolate bar and some of those Tender Milka things we mentioned a ways back. Joni opened her first gift and found a German Christmas song book. She seemed to be pleased. My second two were a pack of soft orange cakes (yummy) and a wooden model. It’s a velociraptor made of wood! Look for a whole post about that in the future. Mary Jo’s second book was The Extended Phenotype by Richard Dawkins, in German.

We then decided it was time for “breakfast”. Of course it was 11:30 or something, but whatever. We had it all planned. We were going to make Kaiserschmarrn! This is where a big problem or complication would add a lot of tension and drama, but there wasn’t any. We made Kaiserschmarrn as planned.

Of course, there was a surprise! It was snowing out! 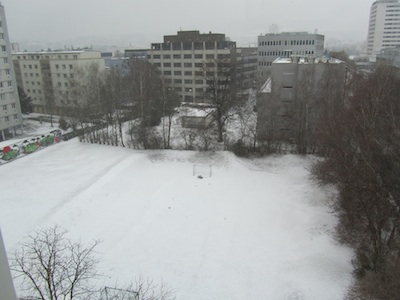 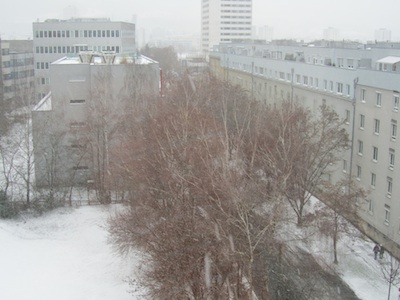 Apparently mother nature was just toying with us last night, but decided to go full force this morning. No complaints here. A Christmas isn’t a Christmas without a coating of snow!

We set to work on the Kaiserschmarrn. 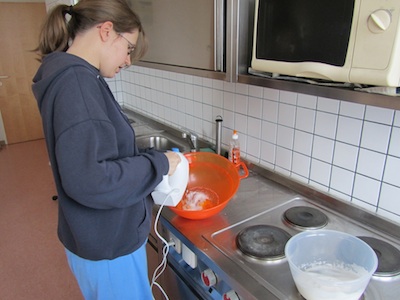 I suppose you’re wondering what Kaiserschmarrn actually is. Well, it’s essentially a gigantic pancake with less flour and raisins added that’s chopped up, coated with powdered sugar, and served with fruit sauce. We used apple sauce for our ‘schmarrn. Here’s 20 seconds of it cooking!

The finished product was quite tasty and left us very full! 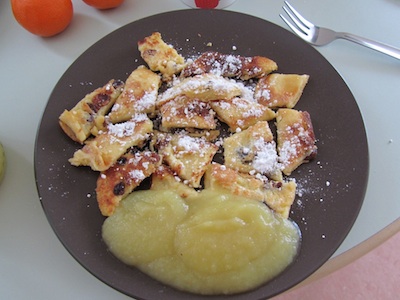 With full bellies we returned to the room. By that time we were kind of tired again, so Joni took a big 3 hour nap. Once she recovered from her snooze, we watched an episode of MythBusters, then just vegged out.  Then we got a hold of Joni’s parents on Skype.  It was nice to hear about their Christmas.  It’s now super late and Joni’s playing Xbox. I’m doing this post and “working” on some other posts to come. Of course in the IT industry, “working” looks a lot like sitting. Maybe that’s what I’m doing…