After seeing the countryside, we still needed to check out Dublin itself! We slept in just a hair, grabbed some breakfast, then headed out into the city for some exploring. We had kind of explored O’Connell street the day before, so we decided to head down to St. Patrick’s Cathedral. It’s Ireland and there’s a St. Patrick’s Cathedral. How could we not go? 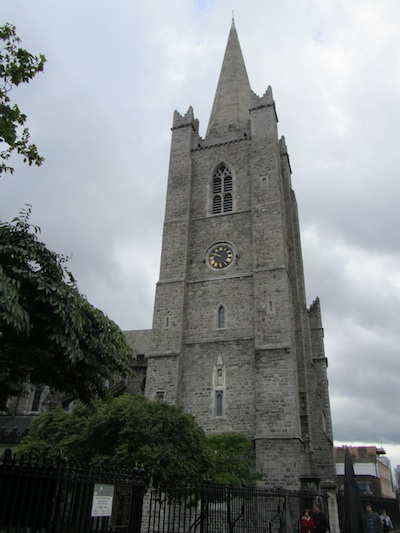 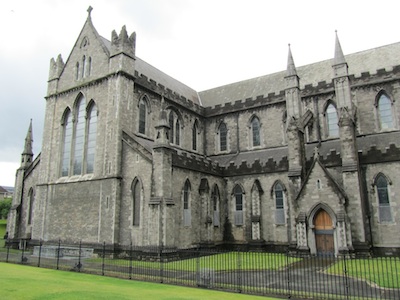 The cathedral is actually built on the supposed site where St. Patrick would baptize people in a well. I say “supposed” because I don’t think anyone actually knows for sure. They’re just guessing. There’s a little park next to the cathedral that’s got a fountain, some benches, and a poet’s wall. It’s this weird wall with little alcoves dedicated to different poets. Some of them have speakers so that when you walk by they play some kind of noise. I didn’t really get it, but then I never get poetry. 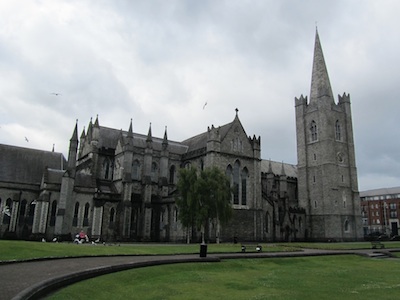 We walked around to the front of the cathedral and on our way we saw this sign on a bench. 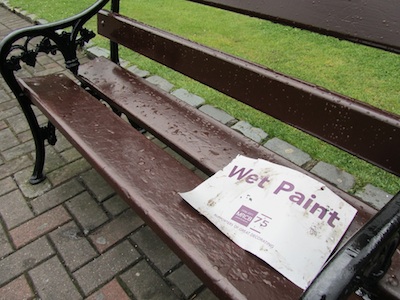 Considering that it rained at least once every day we were in Ireland, yes, the paint is wet. Thank you for letting us know. I had actually noticed a building with a wet paint sign the other day, and I made the same joke to Joni, but I didn’t get a picture. This second wet paint sign afforded me the opportunity to share the joke with you!

We walked around to the main entrance and saw that it was like 6 Euro a person to get in. We normally don’t pay to see churches, but we went crazy and decided to do it. Access to a bathroom may or may not have played a role in the decision making. Result of decision: glad we did. It’s a pretty neat place. I actually like Irish churches a lot more than most European churches because they’re a little more down to Earth. There’s not nearly as much gold leaf. I think they’re just stately without being gaudy. See what I did there?

The church has some interesting stuff in it. One of the more interesting things for me was that they found a big stone buried in the garden that they believe was placed over the well that St. Patrick baptized in. That’s kinda cool! 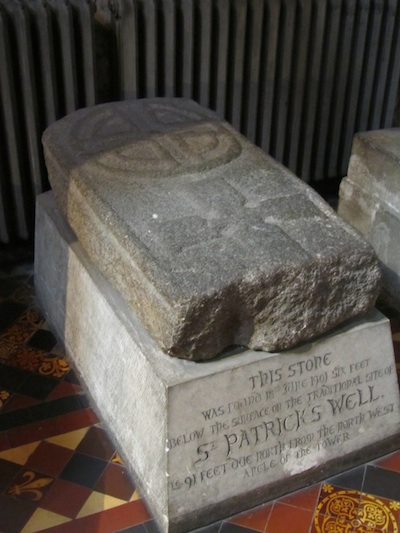 Alright, I bet you want to actually see what the place looks like, don’t you? Fine then. 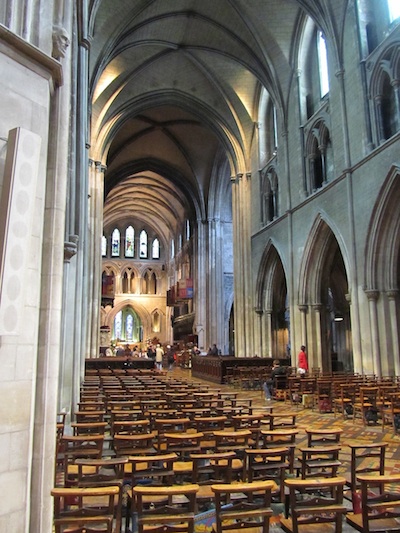 The wings of the cathedral have a ton of memorial plaques. I actually think it distracts from the stateliness of the place, but you gotta have something to bring the tourists in! Something kind of odd that we noticed is that all the seats have little cushions, but each cushion has a different design on it. Some have family names while others are just pictures. It’s confusing. 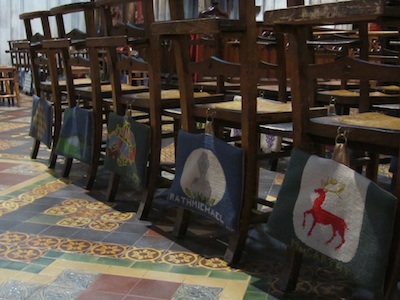 Even more confusing though are these things! 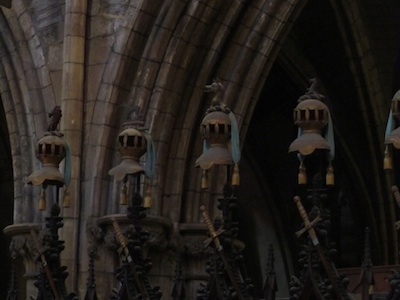 Those are sitting on the little pokey bits on top of the choir seats. The deal is that at one point knights were given seats in this area. Each knight had a decorative sword on their little area and a banner above their head. So, knights on the pokey bits. It makes sense… at least a little.

They also had this wicked looking podium. Most podiums are basically just functional podiums, but then if they’re in a church or fancy place they get some cloth or gold to jazz them up. St. Patrick’s doesn’t mess around with no normal podium in fancy clothing. St. Patrick’s just has a gold bird hold the book up. 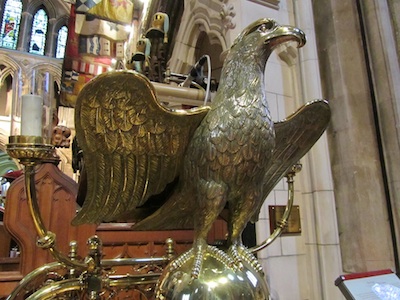 We looked around a bit more, saw the tomb of Jonathan Swift (it’s just a plaque on the floor), then went through the gift shop. They had some interesting stuff, including one-of-a-kind stained glass hangers. 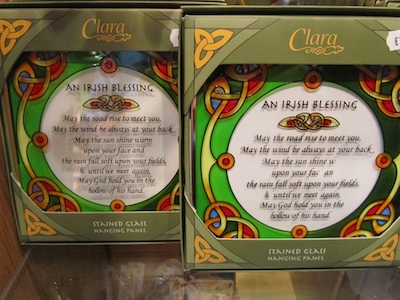 Another kind of neat thing is this dealy bopper: 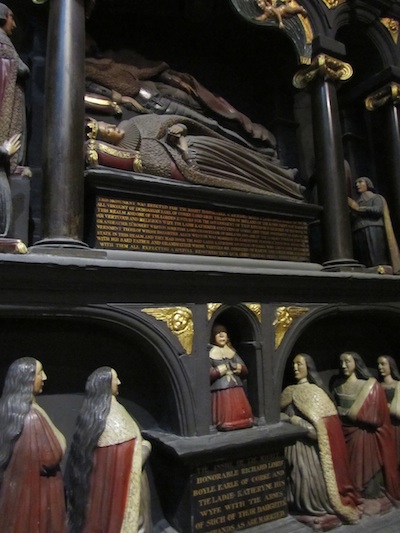 It’s really only interesting because it’s a monument to the Boyle family. The specific person of interest is the kid in the middle on the lowest section. Why is that important you ask? Well, that is believed to be Robert Boyle, one of the fathers of modern chemistry. OK, so maybe it’s only interesting to me.

We left the cathedral and headed through the back streets of Dublin to our next stop: the Guinness Storehouse. We had heard that they run tours and at the end you get to have a free pint in their observation bar. That sounded neat, so we were going to do that. Notice the use of the word “were” there? Well, we found out that it was 15 Euro per person. We actually wrestled with doing it or not doing it for quite a long time. We eventually decided that it probably too much money. Still, at least we can say we were there. 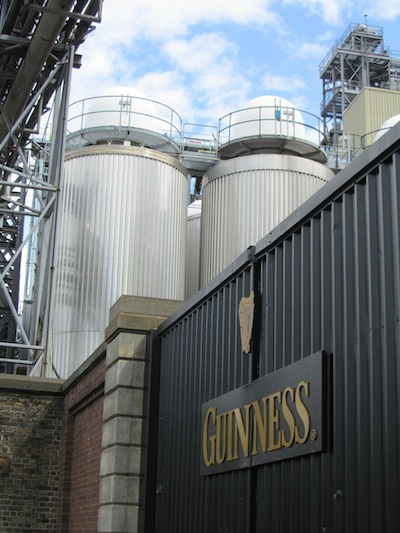 It was getting onto noon, so we headed back to the hostel for lunch. We munched on leftovers from the night before and were quite satisfied. We also did just a little checking on the Internet to arrange getting to the airport the next morning and checking prices on the other attraction we wanted to see that day. We figured that it was worth it, so we left the hostel and headed to… the Old Jameson Distillery. 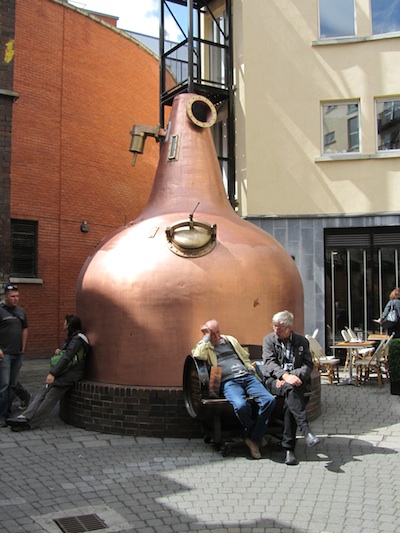 That’s right, we skipped the Guinness tour and instead took the Jameson tour. For those that don’t know, Jameson makes triple distilled whiskey. It was cheaper than Guinness, you still got a free drink at the end, and it actually turned out to be pretty entertaining.

We got a little video about the founder of Jameson, the walked through a recreation of the distillery that used to be there. The place we were at was the distillery until the late 70s, but then they moved operations down to southern Ireland. The place in Dublin is just a tourist attraction now. Still, they did a decent job recreating what the place looked like and they actually gave us quite a lot of information on how they make their whiskey. The big differences between Jameson, Scotch whiskey (scotch), and Jack Daniels are in how the grain is dried, how many times it’s distilled, and how it is matured (aged). On the grain front, Jameson uses a no smoke fuel for the fires that dry the grain. Scotch is dried with peat fuel and Jack Daniels uses some other smokey fuel. Jack Daniels is distilled once, scotch twice, and as was pointed out many, many times, Jameson is distilled three times.

Maturation is done in barrels. Jack Daniels uses new barrels that are charred on the inside to give it a smokey taste. Jameson uses old bourbon or port barrels to age their whiskey. I asked the tour guy what the maximum age a whiskey can be matured is, but he just said that Jameson has only ever aged a whiskey 32 years.

At the end of the tour we got a free drink. Joni tried the straight Jameson, and I got a Jameson with ginger ale. I thought the straight stuff was a little bit much, but the ginger ale mix was pretty good. I could see Jameson being an excellent ingredient for mixed drinks.

The tour guide also did a little taste test with some volunteers from the tour that pitted top of the line 12 year old scotch against Jack Daniels and Jameson. Most people chose Jameson as the best tasting, but we can’t really be sure they weren’t biased, now can we?

We stopped into the gift store on the way out and ogled the 4000 Euro bottle of Whiskey and the 50,000 Euro set of every top tier whiskey from 1984 to present. 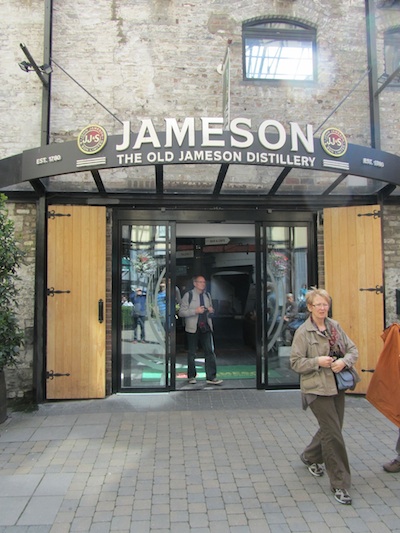 It was getting surprisingly late in the day by this point, so we headed to the grocery store to stock up on some supper for the evening. Along the way though, I had a brilliant idea to visit this crazy candy store we had spotted the very first day in Dublin. The candy store is called Happy Pills. 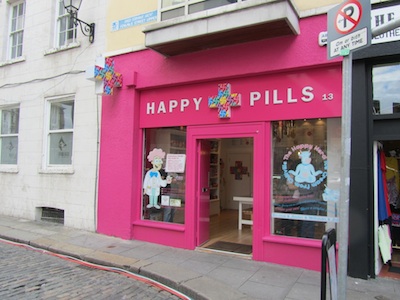 We just thought “Oh, candy store!” We didn’t really get it until we went inside. The deal is that you buy a little bottle, then fill it with candy from the buckets. After that they seal it and you choose a label to stick on. The final product looks like a prescription bottle of pills. It’s really cute actually.

They even had imported stuff from the States. We saw some cookie dough Pop Tarts. They were 6.50. A single Tootsie Pop was 2 Euro. It was a little crazy, but that stuff is expensive to import I bet. They also had ice cream. We love ice cream, so Joni got a cream soda float (they were out of root beer), and I got a Snickers “milkshake”. I don’t think they have the same meaning for “milkshake” as we do in the States. My “milkshake” (OK, I’ll stop with the quotes now) was literally a Snickers bar blended with milk. I’m not joking. It was Snickers flavored milk. For the price I paid, it was a huge letdown. Stupid milkshake.

Grocery shopping was a complete success. We returned to the hostel and Internetted a bit before supper. After supper we blogged and Internetted. We also packed, but in general it was a light evening. We made it a point to get to bed early. Getting to bed early would be essential in getting up very, very early the next morning to catch our flight.