The next morning we got up and headed downstairs to the breakfast buffet. Oh, it was nice. They had made to order eggs, bacon, salad bar, and soft serve ice cream. We pigged out. And we filed the paperwork for our fun license. What’s that you say? Well, it’s the paperwork required to go drive a dune buggy in the desert. Yes, Saturday was dune buggy day.

After breakfast we got picked up and headed out to the desert. We watched an all-to-brief safety video and then we were off (with helmets in hand and valuables locked away at the office) to the buggies. We rented two two-seater buggies. Dennis and I drove. The format was easy: follow the course leader through the dunes. But we got an extra wrinkle: we somehow managed to come during the three days a year it rains in Vegas, so instead of romping through sandy dunes, we got to romp through muddy wet dunes and through tiny rivers.

It was a really good time. Once we let go of trying to stay any sort of clean (the goggles and us were covered in mud in about 2 minutes flat), we just let go and went tearing around like mad people. We went up dunes, down dunes, around dune, and most terrifyingly, over dunes. Since we were just following the car in front of us, we didn’t really know where we were going. When we went over dunes though, they would sometimes have a biiiiiiig dropoff on the other side. So we’d just be going along following the car ahead of us, it would go over a hill, and we’d see the flag on it just disappear. That kinda meant we were in for something scary, but at that point we just had to power through it. I tried to find a video of that (I was going to record but I brought the wrong housing for my camera), but this is the closest I could get:

Maybe that’s all the bigger these dunes were, but they felt A LOT bigger when we were going over them. It was scary, but also really really fun.

After we turned into mud creatures, we got a ride back to the hotel, cleaned up, then took a big nap. You wouldn’t think it, but it takes a lot out of you going around in a dune buggy for 30 minutes.

Naps completed, we got up and headed out to the Mob Museum. Vegas has somewhat of a… shady past. The museum is all about organized crime in the city (and nation to some extent) and the campaigns to break it up. It was a neat place, but it was really crowded. Far moreso than most museums I’ve been to. I think that says something. We went through it and looked at the exhibits and saw the little video presentation (shown in the actual courtroom where hearings were held to investigate organized crime) and poked around at some of the interactive bits. It was a nice way to spend the afternoon after our rambunctious morning.

On our way back from the Mod Museum we ran across the place with gluten free pizza we had searched for the first night. We took the opportunity and crammed ourselves full. Then we waddled around the downtown area (the Fremont Experience) just to see the night life. There were some protestors running around proclaiming the word of Jesus. There were also cops around to make sure nobody got too uppity. I happened to spot a landmark from my childhood, so I snapped a pic: 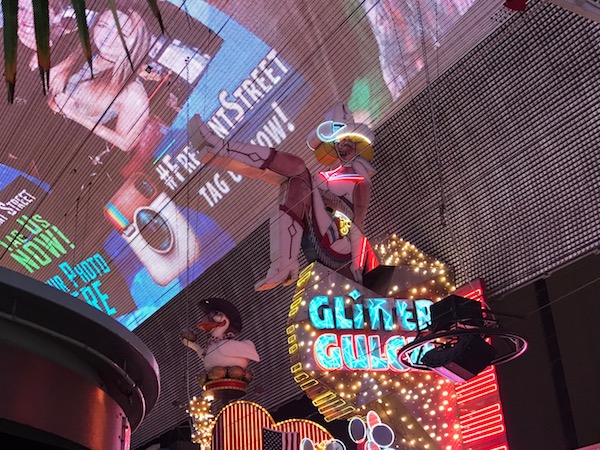 What does that have to do with my childhood? Back in ’92 the sequel to Honey, I Shrunk The Kids came out: Honey, I Blew Up The Kid. The climax of the movie takes place right on Fremont street. This was before it became a tourist area. The giant kid puts a car on that cowgirl’s leg.

I might have watched the movie again recently. Maybe.

We turned in early to get a solid start to our last day in Las Vegas.