Sunday was our big Thanksgiving day! We went down to another person’s dorm. We got a little lost on the way down there, but we found it.

We were supposed to eat at 4, so we got there at about 3 with our 12 pounds of potatoes. We peeled them (since no one is picky about pealed potatoes), sliced them, and started boiling. Mary Jo was worried that we’d still be making the potatoes with everyone there, everything else ready to go, and people chanting “FEED US FEED US FEED US”. We managed to get them cooked and mashed by 4PM. We used our new electric mixed. We were going to get a regular hand masher, but that was 8.50 while the electric mixer was only 13. Seemed like a good buy.

Getting back to the meal. We were ready right at 4PM… but no one else was. We didn’t actually get eating until after 5. By that time the potatoes were a little luke-warm, but no one said anything. 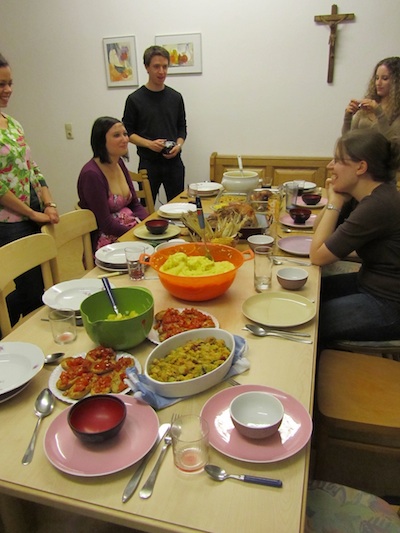 We got everything arranged on the table and took a few pictures. We had stuffing, cornbread muffins, potatoes, green bean casserole, turkey, a chicken, mixed vegetables, and pumpkin soup. 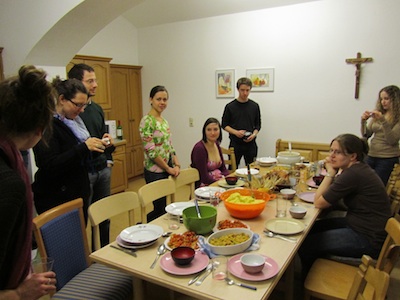 The turkey was the big affair obviously, and it turned out rather well. 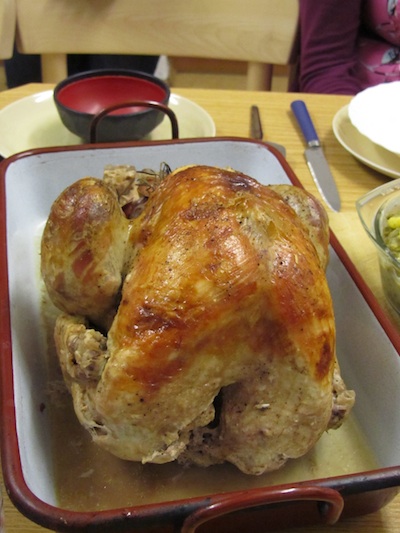 One of the guys brought a little centerpiece to finish off the atmosphere. 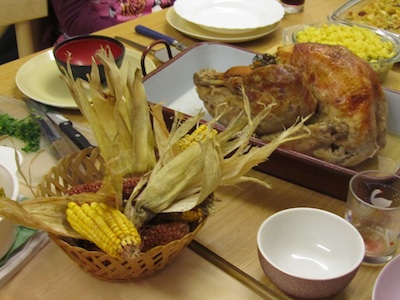 After dinner we had some snacky deserts in the form of cookies and brownies. Someone did bring some pumpkin pie. I didn’t get to that though. We sat around and talked a bit, cleaned up, then played some Activity Jr. that Mary Jo had brought. About 8PM we kind of broke up the party and everyone went home.

We left and started walking, but we soon found we were going in the wrong direction. We got turned around and found our way quickly enough, but it was odd to be so disoriented. At least now that we’ve been there once, we won’t have that problem again.