And at last, we come to the final day of the Birthday in Vegas. Once again we hit up the breakfast buffet and ate ourselves silly. I think I had three servings of ice cream for dessert. Oh, it was good. But after breakfast we had to get packed up for our flight later in the day. We needed to check out, and we weren’t going to be around. We needed to get our rental car and get on the road. Where were we going? I’ll give you a hint (and remember, pretty much every picture can be clicked for a larger version):

That’s right, we spent our final day out at Hoover Dam (the Wikipedia article is actually really interesting)! It’s just a quick 45 minute drive from lovely downtown Las Vegas. It’s a good thing we left early too. The line of cars waiting to get in when we left was literally miles long. But I’m jumping ahead.

We walked down the street from the hotel to a different hotel that had a little car rental kiosk and picked up our vehicle for the day. We rented a little car, but like most car rental places, they were out of those, so we ended up in a very nice minivan. We got out of the garage and hit the road out to the dam. We arrived sometime around 9 (I think). We all headed down to the visitor’s center and found a big sign that said ‘No snacks’ (basically). Well, we were packing snacks, so Dennis and I ran back to the car to drop off snacks while Pam and Joni headed in to get tickets.

We met back up and saw a little introductory video to the dam. Then we had about 30 minutes before our tour began, so we wandered through the museum and onto the dam overlook. Joni was pretty enthused with the overlook. 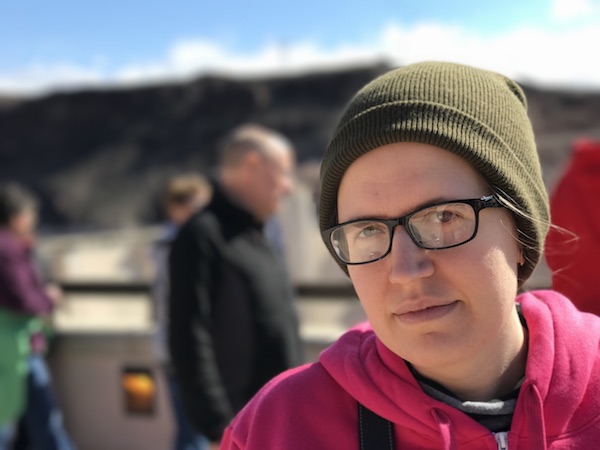 The overlook really did have a great view of the dam though. 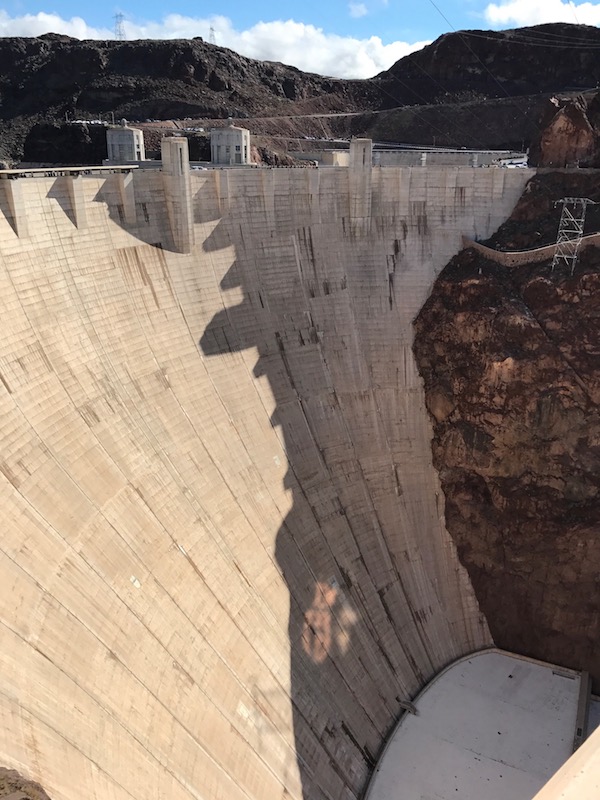 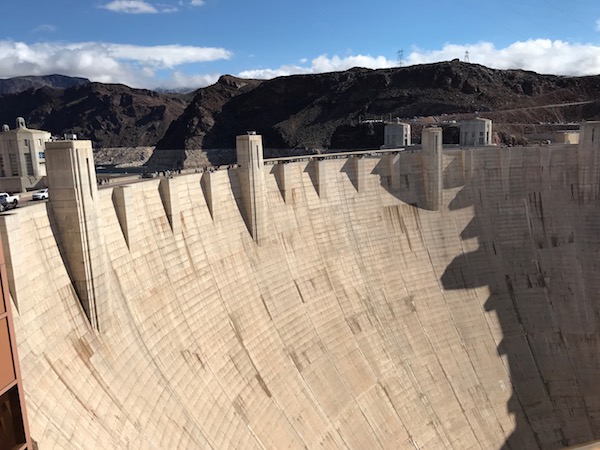 We met our tour guide and the rest of the group and took an elevator down to edge of the dam. We walked through rock tunnels to one of the inlet pipes. The pipes are called penstocks and are responsible for moving water from the lake side of the dam down to the generators. They gradually narrow as the water goes from point A to point B. This increases the water pressure. Where we were standing, the pipes were 30 feet across. 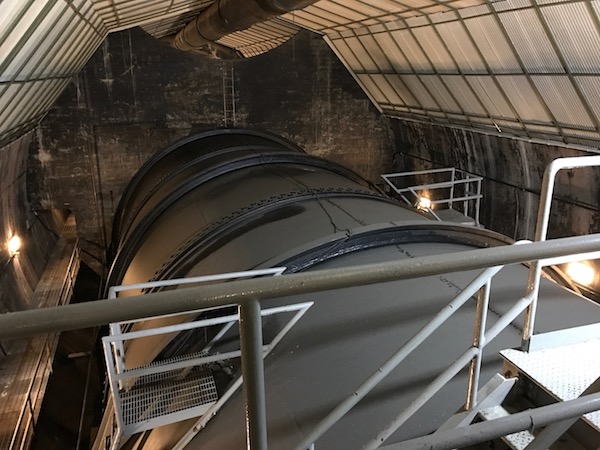 The guide took use back through the rock tunnels to the elevator where we went down a few more levels. We then walked through tunnels in the power station to get to the generator room. 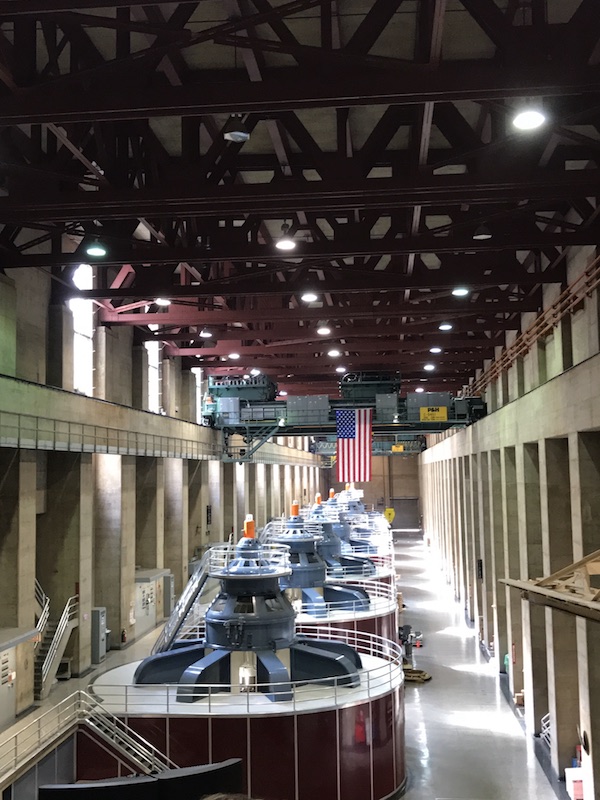 The whole dam is symmetrical and the river itself is the border between Nevada and Arizona. We were on the Nevada side for the whole tour. So this is the Nevada generator room. There’s another one on the other side of the river. Wikipedia tells me that the dam can generate up to 2080 megawatts, but actual output varies dramatically by water level in Lake Mead (the lake formed behind the dam) and downstream demand for water.

The tour guide spend some time talking about the architecture of the dam, power generation, how the generators are so heavy that it takes two of those big cranes on the ceiling to move around one generator… and that one of the cranes could pick up the Statue of Liberty.

Hoover Dam offers two kinds of tours. The shorter tour ends at the generator room. I think that was the tour we took the last time I was at Hoover Dam. This time though, we took the longer tour. So half the group left and headed up to the top of the dam while we continued through a locked gate deeper into its passages. The first hallway we went down was very nicely decorated (had fancy tile, etc.) and brought us from the power station deeper into the interior. We then took an elevator up into the middle elevation of the dam. We ended up in an inspection/airflow tunnel. It was neat because the concrete looked like wood. The used a special kind of high-oil wood to create the form for the tunnel. The wood worked well for easily separating from the dried concrete. The whole process left the grain of the wood in the concrete, so it looked like the walls were wood textured. It was cool.

The tour guide took a moment here to talk about how the dam was constructed using a pioneering practice of running pipes through large sections of concrete. Once the concrete was poured, cold water was pumped through the pipes. The cooling helped the concrete cure more quickly. Without this process, the guide said that the dam would still be cooling today. Weird.

Then we got the next big milestone on the tour, but instead of typing up an explanation, I’ve actually got a video!

Scary hole and camera failure complete, so moved on to more tunnels within the dam. We learned about how the whole thing is basically a bunch of concrete blocks sitting on top of each other, but none of them are connected. The weight of the top of the dam combined with the water pressure behind it causes the blocks to shift and push out into the cliff walls and then together. So the whole thing is basically held together by magic.

We got to see the division between blocks as we walked through the tunnel. We also got to see the staircases that run through the damn to get between tunnels at different heights. Thank goodness we got to use the elevator. The stairs looked scary going up. 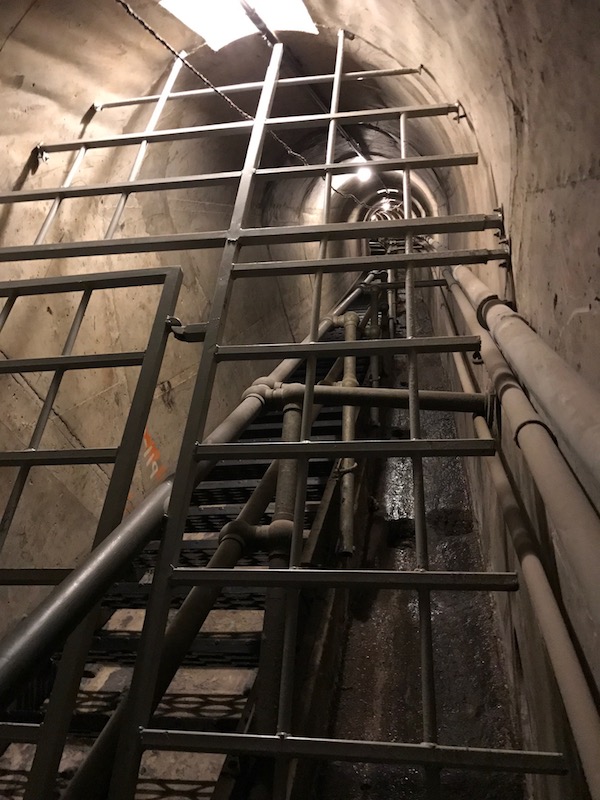 And REALLY scary going down. 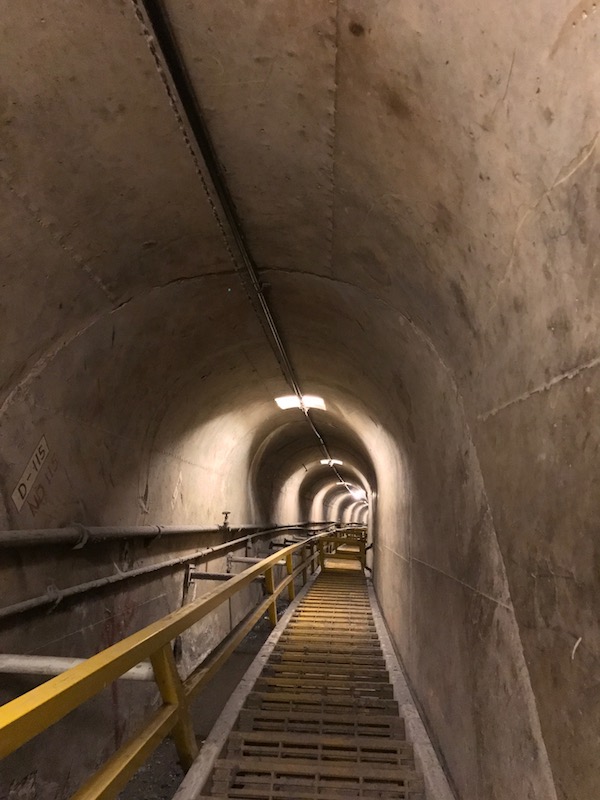 And finally to end the tour, we hopped back on the elevator and zipped up to the top of the dam. We walked around and took some pictures. 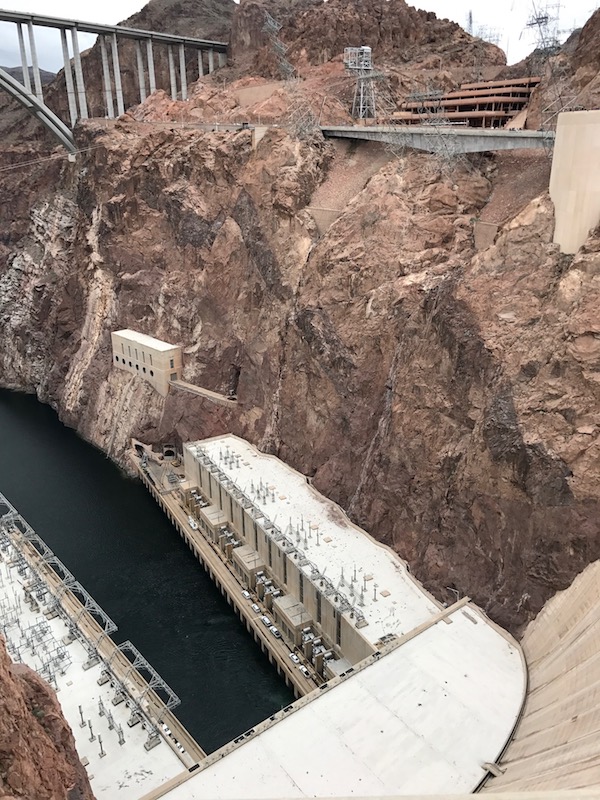 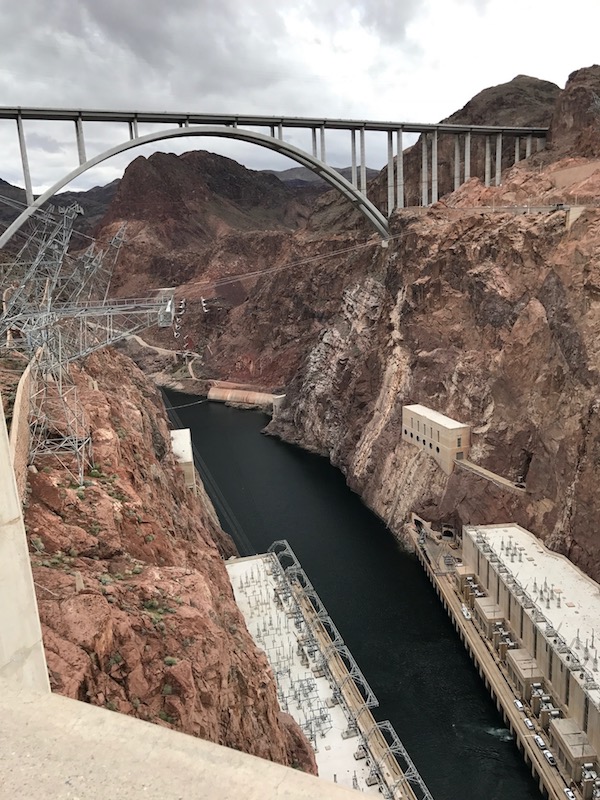 And for the first time we actually got to take a peak at Lake Mead. 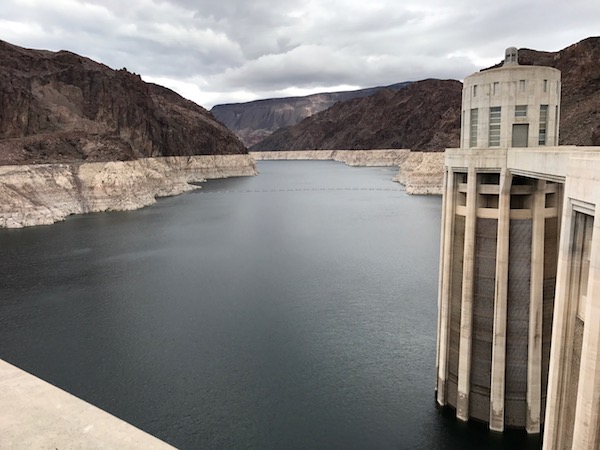 The water level is currently quite low. The drought in the area has taken a tole. I even mentioned while we were there that I remembered the water being higher the last time I visited. According to Wikipedia, the lake hit a new record low elevation of 1,071.61 feet just last year. The dam was originally designed such that if the water went below 1050 feet, it wouldn’t be able to generate power. They’re installing new generators for the possibility though, so they’ll have a backup option all the way down to 950 feet.

And we saw the gigantic towers that are the actual intakes for the penstocks we saw at the start of the tour. At this point though, we had wandered over to the Arizona side, so we were looking at an entirely different state’s intake tower! 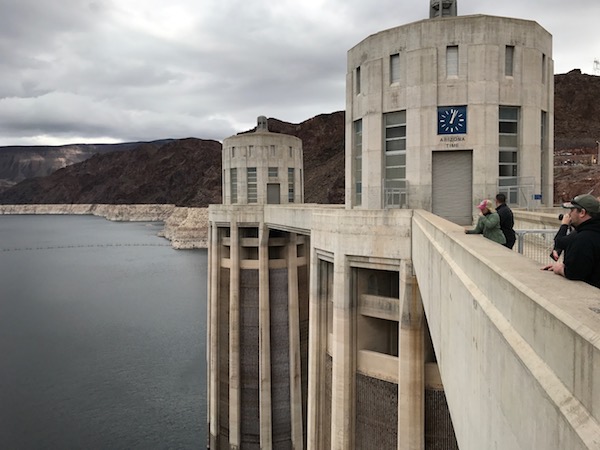 Perhaps the only picture of the group: 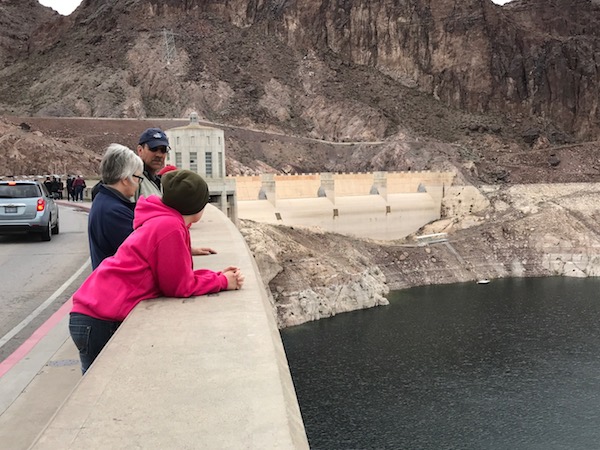 We headed back to the visitor’s center and grabbed some lunch, then we hit the road back toward Las Vegas. There was a little town called Boulder City between the dam and Las Vegas. It was the town that sprung up to support the workers actually building the dam. Today it’s a nice little town with artsy shops and food. We drove through downtown and stopped at a crazy knickknacks store, then we headed out on the main highway and stopped at a place selling metal art. Like, big tortoises and flowers and dragons all made out of sheet metal. It was a pretty cool place. I looked on Google and apparently it’s called “Hacienda Interior”.

We stopped one more time at DQ to get a little treat, then we headed back to Las Vegas. On our way out we saw the massive line of cars trying to get through… sorry. The trip back was fast. We headed straight to the airport since Joni and I were flying out that afternoon. Dennis and Pam were staying one more day. We arrived at the airport, Joni and I got through security with lots of time before our flight, so we just napped to recover from a long day. A quick flight back to Seattle and our Birthday in Vegas weekend officially came to a close.